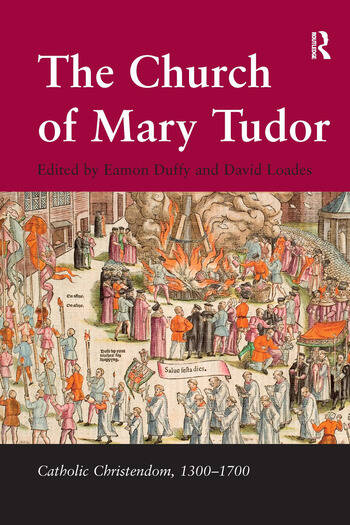 The Church of Mary Tudor

The reign of Queen Mary is popularly remembered largely for her re-introduction of Catholicism into England, and especially for the persecution of Protestants, memorably described in John Foxe's Acts and Monuments. Mary's brief reign has often been treated as an aberrant interruption of England's march to triumphant Protestantism, a period of political sterility, foreign influence and religious repression rightly eclipsed by the happier reign of her more sympathetic half-sister, Elizabeth. In pursuit of a more balanced assessment of Mary's religious policies, this volume explores the theology, pastoral practice and ecclesiastical administration of the Church in England during her reign. Focusing on the neglected Catholic renaissance which she ushered in, the book traces its influences and emphases, its methods and its rationales - together the role of Philip's Spanish clergy and native English Catholics - in relation to the wider influence of the continental Counter Reformation and Mary's humanist learning. Measuring these issues against the reintroduction of papal authority into England, and the balance between persuasion and coercion used by the authorities to restore Catholic worship, the volume offers a more nuanced and balanced view of Mary's religious policies. Addressing such intriguing and under-researched matters from a variety of literary, political and theological perspectives, the essays in this volume cast new light, not only on Marian Catholicism, but also on the wider European religious picture.

'... a ground-breaking book...' The Catholic Times 'This handsome volume is fluent and engaging church history at its best, at once meticulously researched and persuasive in its presentation of the bigger picture... The Church of Mary Tudor is a thorough, convincing and always well-written account...' New Directions '... this volume goes far in offering readers a new and convincing reappraisal of Mary Tudor's regime.' Renaissance Quarterly 'Overall, the editors are to be commended for providing a thorough investigation into the motives and methods behind Mary's Catholic restoration.' Catholic Herald ’In short [...] this volume raised, in the mind of this reviewer at least, a number of essential and genuinely new and interesting questions about not just the Marian Church but the whole Marian State, and also about how much mileage there remains in the revisionist approach to the Marian experiment.' Church History ’An introductory essay on Mary's personal religion by David Loades is one of the book's highlights and could easily be assigned even to undergraduates... There is much worth reading here, and some very important new interpretations to be embraced.’ Journal of British Studies ’... a collection of essays from among the best from the field of English Catholic history, is comprehensive, so much so that it reads almost like a monograph.’ Anglican and Episcopal History ’This is rich fare that offers fascinating insights into the teachings, structures, and practices of Mary’s Church, and raises important questions about continuity and discontinuity, both within England and across the Continent.’ Ecclesiology ’The contributors to this volume succeed admirably in providing a more balanced evaluation of Marian Catholicism. ...this collection’s depth and range provides a valuable reassessment of Mary’s religious policies and the vibrancy of Catholicism during her reign.’ H-Albion

The Church of Mary Tudor