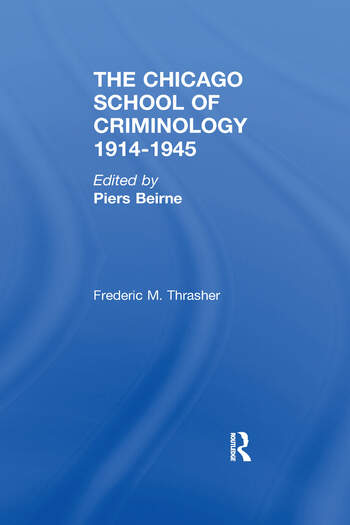 Between 1915 and the early 1940s, sociological research in the United States was dominated by various academic disciplines at the University of Chicago, particularly those of political science and sociology. To journalists, social reformers and sociologists the ever-changing and fascinating patterns of daily life in Chicago were a barometer of the human condition itself. In this stimulating atmosphere, many creative scholars combined their talents and applied their energies to a sociological analysis of the harsh consequences of 'urbanism'; especially to those problems generated by living in the inner city.

The Chicago School brought to its research on 'urbanism,' innovative, vigorous and eclectic methods of analysis. Members of the Chicago School used a dazzling array of methodological techniques in their research and, above all, Chicago sociologists took great pride in conducting research in 'the open' or in 'the field' (on the streets, in opium dens, in brothels and in parks), rather than in laboratories, faculty offices or libraries.

This collection brings together classic texts that demonstrate and explore work at the Chicago School of criminology in the 1920s and 1940s. A new introduction by the editor explains the significance of the works selected for the collection.