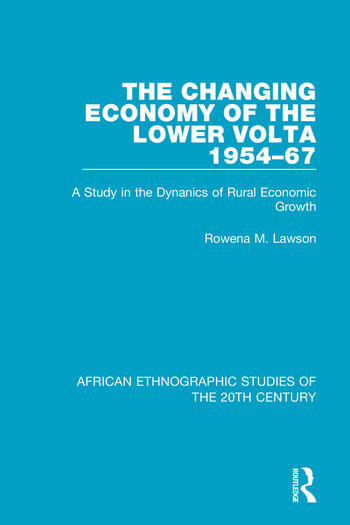 The Changing Economy of the Lower Volta 1954-67: A Study in the Dynanics of Rural Economic Growth

Originally published in 1972 this study analyses the process of economic growth and social change in the riparian communities of the Lower Volta River in Ghana, which came about in large part due to the construction of the Volta dam in 1963. With its completion many of the riparian communities were denied the ecconomic advatages of natural irrigation and water flow for inland fisheries, although they did benefit through the emergence of a valuable lake fishery. The study cound that the socio-economic preconditions for a rise in the standard of living had been building up over some time and many social, economic and political forms of change had been introduced to change the previous static equlibrium. Such influences began to erode the hitherto unquestioned acceptance of traditional institutions and the stability and security they offered.

Part 2: The Empirical Study 1. General Features of the Economy

The Changing Economy of the Lower Volta 1954-67: A Study in the Dynanics of Rural Economic Growth