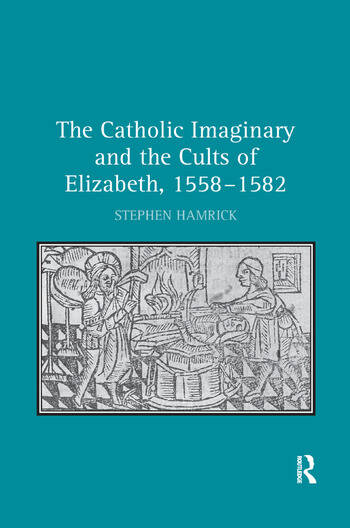 The Catholic Imaginary and the Cults of Elizabeth, 1558–1582

Stephen Hamrick demonstrates how poets writing in the first part of Elizabeth I's reign proved instrumental in transferring Catholic worldviews and paradigms to the cults and early anti-cults of Elizabeth. Stephen Hamrick provides a detailed analysis of poets who used Petrarchan poetry to transform many forms of Catholic piety, ranging from confession and transubstantiation to sacred scriptures and liturgical singing, into a multivocal discourse used to fashion, refashion, and contest strategic political, religious, and courtly identities for the Queen and for other Court patrons. These poets, writers previously overlooked in many studies of Tudor culture, include Barnabe Googe, George Gascoigne, and Thomas Watson. Stephen Hamrick here shows that the nature of the religious reformations in Tudor England provided the necessary contexts required for Petrarchanism to achieve its cultural centrality and artistic complexity. This study makes a strong contribution to our understanding of the complex interaction among Catholicism, Petrachanism, and the second English Reformation.

Contents: Introduction: reformations and reformulations; The Queen's court, the city, and Catholicism; Barnabe Googe and Elizabeth's barbed horse; The almoner and the queen; Gascoigne's royal confessions; Thomas Watson, the Earl of Oxford and Queen Elizabeth; Conclusion Reformation Petrarchanism and the cults of Elizabeth; Bibliography; Index.

’... a well-researched, exhaustively argued, highly readable and challenging scholarly work. It is essential to both academics and students interested in early Elizabethan Petrarchan poetry, and the religio-political context of the Reformation.’ Parergon 'Hamrick’s study is strong in the range of texts it discusses and for setting them within their political and religious contexts. ... he builds well on recent historical and cultural studies that show the pervading influence of Catholic sensibilities within Elizabethan England.' Catholic Historical Review 'With these poets, Stephen Hamrick features men from across the spectrum of religious beliefs current in early Elizabethan England, and shows how they both celebrated the queen and drew upon religious imagery to promote the majesty of her office and of her person. Hamrick is to be congratulated on making the roots of the cult of the virgin queen in the second half of Elizabeth's reign more intelligible.' Sixteenth Century Journal '[Hamrick's] book paints a broader canvas in which a range of beliefs, practices and institutions associated with traditional religion - processions, ritualism, the sacrifice of the Mass, confession, hagiography, purgatory and Catholic funerary rites - are deployed by writers operating within the genre of love poetry or deploying the Petrarchan mode. For this reason alone, it should be essential reading for anyone interested in English Petrarchanism.' Journal of Northern Renaissance 'Hamrick's book is bold, fluent and well-crafted. It opens up new vistas of textual investigation and it ought to be read by every student of the period's literature.' Early Modern Literary Studies

The Catholic Imaginary and the Cults of Elizabeth, 1558–1582