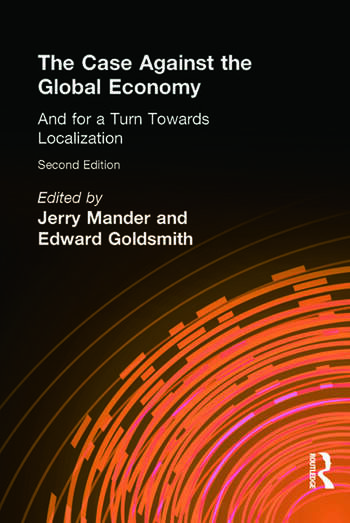 The Case Against the Global Economy: And for a Turn Towards Localization

The greatest political debate of our time is about the blind rush towards a single global economy, its consequences for jobs, democracy, human well-being and cultural diversity, and its impact on the natural world that sustains us. Its effects will be profound and irreversible, but globalization itself is not inevitable. In The Case Against the Global Economy, 24 leading economic, agricultural, cultural and environmental authorities, drawn from across the world, argue that free trade and economic globalization are producing exactly the opposite results to those promised. From a detailed analysis of the new global economy, its structures and its full social and ecological implications, they show how it is undermining our liberty, our security and our well-being, and is devastating the planet. First published in the USA in 1996, in an edition focused on North America, the book won the American Political Science Association award for the Best Book in Ecological and Transformational Politics. This completely revised and updated international edition presents a passionate and persuasive case for the need to reverse course, away from globalization and towards a revitalized democracy, local self-sufficiency and ecological health.

Introduction: facing the Rising Tide * Part 1 Engines of Globalization: Development as Colonialism * The Failure of Bretton Woods * Technologies of Globalization * Electronic Money and the Casino Economy * Mechanisms of Corporate Rule * The Rules of Corporate Behaviour * Monsanto - A Profile of Corporate Arrogance * The Wal-Martians Have Landed * Free Trade - The Great Destroyer * Part 2 Impacts of Globalization: Structural Adjustment Programmes * Jurassic Fund * Seeds of Exploitation - Free Trade Zones in the Global Economy * The Global Economy and the Developing World * The Pressure to Modernize and Globalize * Homogenization of Global Culture * The World Trade Organization's Five-year Record - Seattle in Context * The Environmental Cost of Economic Globalization * The World Trade Organization and Developing World Agriculture * The World Trade Organization and the Liberalization of Trade in Healthcare and Services * Fuelling Climate Change * Part 3 Steps Towards Relocation: Shifting Direction - from Global Dependence to Local Interdependence * Conserving Communities * Local Money - a Currency for Every Community * Saving our Small Farms and Rural Communities * The New Protectionism of 'Localization' * The Last Word * References * Index

Edward goldsmith is the founder of The Ecologist, Europe's leading environmental magazine, and author of numerous books, including A Blueprint for Survival, A Stable Society and the Way: An Ecological Worldview. He is also a member of the International Forum on Globalization Jerry Mander is president, programme director of the Foundation for Deep Ecology and a senior fellow at the Public Media Center, a non-profit social and environmental advertising company. His books include Four Arguments for the Elimination of Television and In the Absence of the Sacred.

The Case Against the Global Economy: And for a Turn Towards Localization