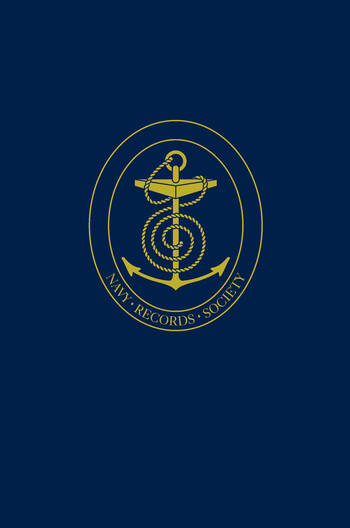 The full title of these three volumes is misleading. The project to publish the papers of Sir George Byng (1663-1733) and his fourth son John (1704-1757) was never completed. Brian Tunstall completed three volumes, but the latest document to appear in the third volume was only dated 1717.

An intended fourth volume of the papers, mentioned in volume 87 Pattee Byng’s Journal 1950, p. xix, never appeared. Pattee Byng was George Byng’s eldest son. Tunstall, however, had written a monograph published in 1928, entitled Admiral Byng, in which he reproduced some documents relating to the admiral and his court martial.

The period presented in this volume is from 1711 to 1717, a period of great political turmoil. The introduction includes a short biography of Thomas Corbett, who had been George Byng’s secretary and confidential assistant. The letters bring personality to a man who later became Secretary of the Board of Admiralty between 1741 and 1751.

The central section relates to 1715 in the operations against the Jacobites, who attempted an invasion, and against whom Byng had a prominent role commanding in the Channel. The documents are mainly letters and orders received by Byng.

The final section of 150 pages contain documents relating to Byng’s command of the fleet in the Baltic in 1717, in which he blockaded the Swedish fleet and protected British commerce against Swedish privateers, and warded off the hostile intentions of other Baltic countries.

William Cuthbert Brian Tunstall (1900-70) served as lecturer in English at the Royal Naval College, Greenwich, and from 1932 to 1937 as the fourth secretary of the Navy Records Society. During World War II, he served as naval correspondent for the BBC’s European services. Subsequently, he lectured at the London School of Economics and at the Royal Military College of Canada. In addition to his distinguished work as a naval historian, Tunstall was a rowing coach of some distinction. A member of one of his crews recalled that ‘during breaks in his coaching [‘Tunny’] would regale us with stories about the signal flags used at the Battle of Trafalgar. A great coach, and a grand character.’