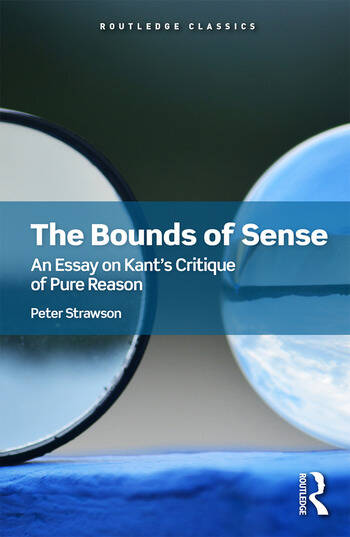 The Bounds of Sense: An Essay on Kant’s Critique of Pure Reason

Peter Strawson (1919–2006) was one of the leading British philosophers of his generation and an influential figure in a golden age for British philosophy between 1950 and 1970. The Bounds of Sense is one of the most influential books ever written about Kant’s philosophy, and is one of the key philosophical works of the late twentieth century. Whilst probably best known for its criticism of Kant’s transcendental idealism, it is also famous for the highly original manner in which Strawson defended and developed some of Kant’s fundamental insights into the nature of subjectivity, experience and knowledge – at a time when few philosphers were engaging with Kant’s ideas.

The book had a profound effect on the interpretation of Kant’s philosophy when it was first published in 1966 and continues to influence discussion of Kant, the soundness of transcendental arguments, and debates in epistemology and metaphysics generally.

Part Two: The Metaphysics of Experience

P.F.Strawson was born in London in 1919. After serving as a captain in the Royal Electrical and Mechanical Engineers during World War Two he was appointed a fellow of University College Oxford in 1948. He first gained philosophical fame at the age of 29 in 1950, when he criticised Bertrand Russell's renowned Theory of Descriptions for failing to do justice to the richness of ordinary language. He was Waynflete Professor at Oxford from 1968-1987 and was knighted in 1977. He died in 2006.

The Bounds of Sense: An Essay on Kant’s Critique of Pure Reason