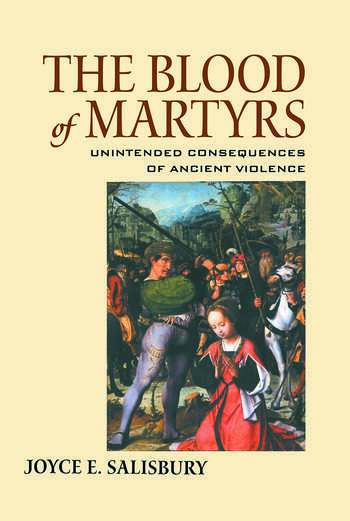 The Blood of Martyrs: Unintended Consequences of Ancient Violence

In The Blood of Martyrs Joyce E. Salisbury chronicles the many spectacles of violent martyrdom that took place during the first three centuries of the Christian era, describing the role of martyrdom in the development of the early Church, as well as its continuing influence on many of today's ideas.

Salisbury shows through the engaging stories of the martyrs introduced in each chapter, how their legacy continues to shape contemporary ideas. Discussing modern martyrdom the book elicits deep lessons for the present from the ancient past and outlining the possibility of a religious future without violence.

In The Blood of Martyrs, Salisbury brings to life this tumultuous time in late antiquity and sheds invaluable light on religious violence, modern martyrs, and self-sacrifice.

Part One: The Power of the Martyrs  1. The Struggle Between Evil and Good  2. Resurrecting the Flesh  3. Magic and the Warrior Martyr  4. Dreams and Visions
5. Misplaced Anger: The Growth of Anti-Semitism  6. How Martyrs Became Mothers and Mothers Martyrs  7. The Blood of Sacrifice  Part Two: Controlling the Martyrs  8. Revolutionary Martyrs: Good Versus Evil Again  9. Controlling the Message  10. You Shall Not Kill [Yourself]: Prohibiting Suicide.  Appendix: Chart of Martyrs.  Notes. Bibliography.

Joyce E. Salisbury holds the Frankenthal Professorship in History at the University of Wisconsin at Green Bay. She is the author of ten books, including the critically acclaimed Perpetua's Passion (Routledge 1997).

"A fascinating exploration of an ancient Christian concept that continues--albeit in a much altered form--in today's world. The evolution of social and personal meanings of martyrdom led to unintended consequences that continue to inform notions of self-sacrifice, suicide, and passionate, even fanatical, belief. Salisbury reaches across the centuries to a bewildering period of Christian history and exposes the roots and logic of seemingly inexplicable acts. She argues the need for reason and discourse over martyrdom to bridge the related tensions that trouble our own world." -- Jacqueline Murray, Professor of Medieval History and Dean of Arts, University of Guelph
"This deeply original study stands as a testament to over twenty-five years of thinking, research, and writing on topics in early Christianity. In this provocative work, Joyce Salisbury explores violence, martyrdom, and sacrifice in the ancient world along with their unintended consequences and influence on our present day attitudes. The Blood of Martyrs is highly readable. The author argues her case with clarity and sensitivity. This is a most impressive piece of work and a notable contribution to a timely and troublesome subject." -- Jane Tibbetts Schulenburg, University of Wisconsin-Madison

The Blood of Martyrs: Unintended Consequences of Ancient Violence