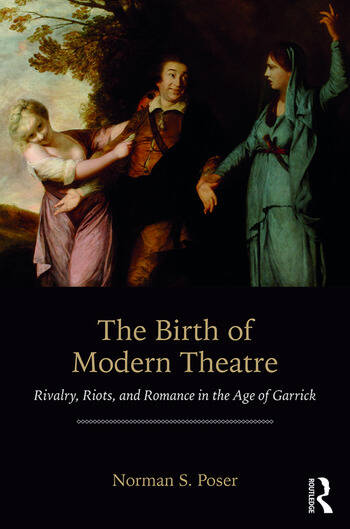 The Birth of Modern Theatre: Rivalry, Riots, and Romance in the Age of Garrick

The Birth of Modern Theatre: Rivalry, Riots, and Romance in the Age of Garrick is a vivid description of the eighteenth-century London theatre scene—a time when the theatre took on many of the features of our modern stage. A natural and psychologically based acting style replaced the declamatory style of an earlier age. The theatres were mainly supported by paying audiences, no longer by royal or noble patrons. The press determined the success or failure of a play or a performance. Actors were no longer shunned by polite society, some becoming celebrities in the modern sense.

The dominant figure for thirty years was David Garrick, actor, theatre manager and playwright, who, off the stage, charmed London with his energy, playfulness, and social graces. No less important in defining eighteenth-century theatre were its audiences, who considered themselves full-scale participants in theatrical performances; if they did not care for a play, an actor, or ticket prices, they would loudly make their wishes known, sometimes starting a riot.

This book recounts the lives—and occasionally the scandals—of the actors and theatre managers and weaves them into the larger story of the theatre in this exuberant age, setting the London stage and its leading personalities against the background of the important social, cultural, and economic changes that shaped eighteenth-century Britain.

The Birth of Modern Theatre

brings all of this together to describe a moment in history that sowed the seeds of today’s stage.

Chapter 1: Dawn of an Era

Chapter 7: A visit to the theatre

Chapter 8: A community of friends and rivals

Chapter 10: The actor as celebrity

Chapter 14: Foote and the dangerous duchess

Norman S. Poser is Professor Emeritus at Brooklyn Law School. His previous books include Lord Mansfield: Justice in the Age of Reason and Escape: A Jewish Scandinavian Family in the Second World War.

The Birth of Modern Theatre: Rivalry, Riots, and Romance in the Age of Garrick