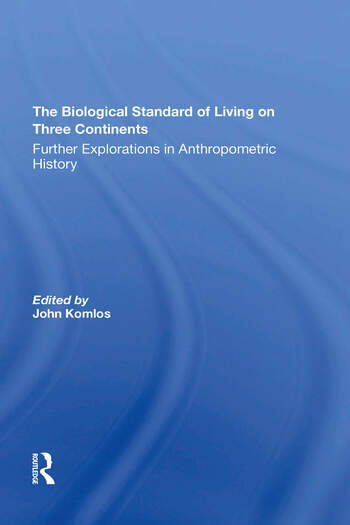 The Biological Standard Of Living On Three Continents: Further Explorations In Anthropometric History

The effort of anthropometric historians to unearth the broad patterns of human biological well-being has led to the examination of nearly forgotten, centuries-old records from dusty archives in practically all the continents of the globe. French historians in the Annales tradition were among the first to adopt methods from physical anthropology and from the biological sciences, but the real expansion of the field dates from the pathbreaking work of Richard Steckel and Robert Fogel, which launched the discipline of anthropometric history on American soil Research has confirmed that physical stature is related to nutritional status and therefore to real family income, and thus to the general standard of living. Historians and development economists will find this line of research useful, as it informs us about the standard of living of members of society for whom data on wages are seldom available—women, children, aristocrats, farmers, and slaves. In addition, this research has shown that the biological standard of living may diverge from conventional indicators of welfare during the early stages of industrialization. Thus, per capita income is an ambiguous measure of welfare during some phases of growth, and it must be supplemented with data from other indicators, such as physical stature. The essays in this volume broaden our knowledge of the human effects of the momentous economic changes of the last two centuries, extending analysis to regions for which such information has been lacking, including Russia, Canada, Indonesia, Italy, and Spain.

Preface -- Introduction: Historical Anthropometrics— Theory, Method, and the State of the Field -- Europe -- The Irish Famine and Intergenerational Influences on Weight at Birth: Two Case Studies -- Beyond Villermé and Quetelet: The Quantitative Relation Between Sex- and Age-Specific Height and Real Per Capita Income -- Diet, Health, and Stature of the Russian Population from the Mid-Nineteenth to the Beginning of the Twentieth Century -- Heights and Welfare in Spain, 1900-1930 -- North America -- Heights of Early American Seafarers, 1812-1815 -- A New Anthropometric Look at the Status of Women and Children in Oneida Community, 1848-1881 -- Heights, Nutrition, and Per Capita Income: Canada, 1870-1915 -- The Heights of Americans in Three Centuries: Some Economic and Demographic Implications -- The Standard of Living Among Polish- and Slovak-Americans: Evidence from Fraternal Insurance Records, 1880-1970 -- Asia -- An Inventory of Secular Changes in Human Growth in Indonesia -- Conclusion -- Conclusion: Anthropometric History and Economic History

The Biological Standard Of Living On Three Continents: Further Explorations In Anthropometric History