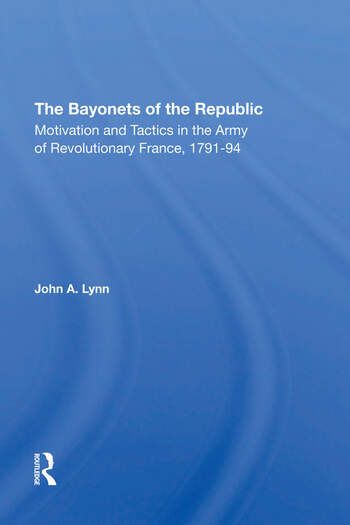 The Bayonets Of The Republic: Motivation And Tactics In The Army Of Revolutionary France, 179194

The Bayonets of the Republic challenges the view of the French revolutionary army as an unskilled but fiercely patriotic fighting force that won simply by overwhelming its enemies with bayonet assaults. Skillfully combining traditional and new military history, Lynn demonstrates that French combat effectiveness encompassed far more than mere patriotism or frenzied charges.Lynn focuses on the Armee du Nord, largest of the eleven armies which protected the borders of France at the height of the Revolution. He does not, however, restrict himself to an analysis of generalship or weaponry, but examines every aspect of life in the French army--from rank-and-file recruitment, officer selection, discipline, political education, and group cohesion, to the flexible use of line, column, and skirmishers on the battlefield. The image which emerges is one of a highly motivated, disciplined, and tactically superior army that outmaneuvered and outfought its opponents.For students of the French Revolution, Bayonets builds upon and extends the best of recent scholarship on subjects as diverse as the debate over conscription and the distribution of revolutionary newspapers and songbooks. For military historians, it combines social, organizational, and operational elements to present a unique view of the French army as an institution and fighting force. And, finally, for social scientists concerned with troop motivation and combat effectiveness, it supplies a highly illustrative case study of troops under fire.

John A. Lynn, an expert on seventeenth- and eighteenth-century warfare professor, is a professor of history at the University of Illinois at Urbana-Champaign and an adjunct professor at Ohio State University. He lives in Champaign, Illinois.

The Bayonets Of The Republic: Motivation And Tactics In The Army Of Revolutionary France, 179194