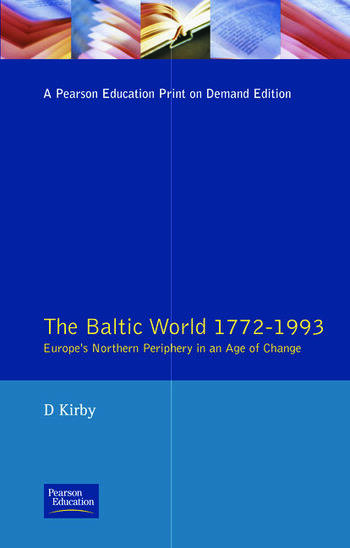 The Baltic World 1772-1993: Europe's Northern Periphery in an Age of Change

This eagerly-awaited sequel shares the characteristics of its distinguished predecessor -- wide geographical and chronological span; expert mingling of political, social and economic history; and Dr Kirby's ability to keep the separate national threads of his account from tangling as he weaves them into the broad regional picture that is his main concern. Here he tackles the contrasting experiences of Europe's northern periphery -- affluence and democracy in the north, stagnation and authoritarianism in the south -- from the French Revolution to the collapse of the USSR and beyond. This is a masterly study of a region that is far from peripheral politically to the post-Soviet world.

<B>Part One: The Age of Empire: </B><BR><BR>"Sturm und Drang"-The Baltic in an Age of Revolution, 1772-1815; Stormclouds, the revolutionary nineties, The spread of war, From Tilsit to Eidsvoll. The Baltic in 1800: Land and people- images and reality, Estates and classes, Reforming the "common people". States and Unions-1815 to the Revolutions of 1848: Constitutions of diverse kinds, Government and society 1830 - 1848, Europe's policeman. The Era of Nationalism: Points of collision, The politics of nationhood. Society in an Era of Change: Landscapes, Lifestyles, Beliefs, Work. The Age of Imperialism 1871-1905: Threatened peripheries, The break-up of the Union, Reaction and reform, Fin-de-siecle: The city, Leisure and morality, The twilight of the old order?. The End of Empire- Russia in Revolution 1905-1917: 1905, The road to war, War and revolution. <BR><BR><B>Part Two: Nations and States: </B><BR><BR>The New Order; Russia, Germany and the Eastern Baltic, The Repercussions of War and Revolution, Independence. The Impact of Change, c.1870-1940; Peasant into Farmer?, The Farming-Economy, Innovation, Invention and Adaptation, The Role of the State. The Interwar Years; Constitutions, government and politics in the new states, In the shadow of the Nazis, Territorial and minority questions, Memel, Danzig and the coming of war. The Tragic Decade- 1939-1950; War in the North, 1939 - 1940, War in the East, 1941-1945, The end of the war in Northern Europe, Division. Affluence and Welfare-Nordic States since the War; Recovery and resurgence 1945- 1960, Consolidation 1960-1973, The oil crisis and after, The resonances of change. A Baltic Renescance?; Stalin and after, Accommodation and dissent, Living with the bear, The end of empire.

The Baltic World 1772-1993: Europe's Northern Periphery in an Age of Change