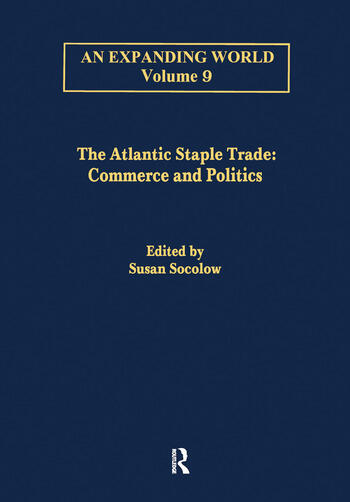 The Atlantic Staple Trade: Volume 1: Commerce and Politics; Volume 2: The Economics of Trade

This two volume set reprints the most important standard studies and interpretations of the development of the crucial Atlantic trade. The first volume, concerned with general trade and political economy, approaches the topic from the viewpoint of individual trading nations in the Atlantic - England, France, Ireland, Spain - whilst not neglecting the importance of regions like West Africa. Rivalry between the different national traders is also considered, as well as the vexed question of the relation of trade to the old colonial empires. The impact of administration, war and regulation as reflected by the contraband issue highlights the strong political element in the developing Atlantic commercial world. Case studies are provided of major staple and luxury commodity trades: rice, molasses, tobacco, cochineal, logwood, hides, cacao and the sometimes neglected whaling industry. These set the scene for quantitative and technical studies of the contribution of shipping to trade. Specific markets considered in more detail include a comparison of Philadelphia and Havana, the changing scale of business activity in the Chesapeake trade, and the impact of trade on port development in America. The volume closes with seminal studies by McCusker and Price on the central role of trade and the Atlantic economy. Taken together these two volumes provide the best possible foundation for the detailed study of the Atlantic trade in global expansion.

The Atlantic Staple Trade: Volume 1: Commerce and Politics; Volume 2: The Economics of Trade