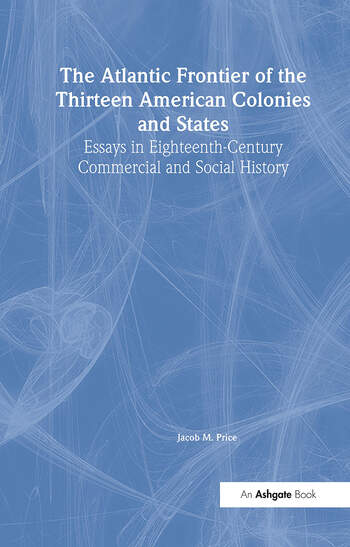 The Atlantic Frontier of the Thirteen American Colonies and States: Essays in Eighteenth-Century Commercial and Social History

The external economy of British North America has attracted considerable scholarly attention in the last two generations, and the papers reprinted here, in this second collection from Jacob Price, make important contributions to quantification, conceptualisation and debate. Studies presenting and analysing new statistical material from the English and Scottish customs accounts are supplemented by a general survey of the transatlantic economy in the 18th century which is required reading for all students of the subject. Price's treatment is diversified into financial arrangements and the role of credit in the slave trade and plantation economies. In a provocative chapter "Who cared about the colonies?", concern in Britain for the 13 colonies between 1714 and 1775 is explored in terms of the ability of the colonies to involve the interests and command the attention and concern of people in Britain from the politically eminent to those in trade and to the nation at large.

Contents: Introduction; The transatlantic economy; Economic function and the growth of American port towns in the 18th century; New time series for Scotland's and Britain's trade with the thirteen colonies and states, 1740 to 1791; A note on the value of colonial exports of shipping; Credit in the slave trade and slave plantation economies; Who cared about the colonies? The impact of the thirteen colonies on British society and politics, ca. 1714-1775; The Maryland Bank stock case: British-American financial and political relations before and after the American Revolution; Index.

'There has never been a finer economic historian of colonial America than Jacob Price....The great strength of Price’s work has been to recognize that the full resolution to most historical problems in which the colonial merchants were involved requires conceptualizing them in transatlantic terms and researching their answers in archives both in Europe and America. Early modern merchants thought internationally, and Jacob Price "thinks like a merchant."' The Northern Mariner, Vol. VIII, No. 1 regarding all three volumes by Price: 'All the essays in these three volumes bear the badge of Price’s scholarship. The research behind them is meticulous- broad in scope, profound in depth, complete...In these three volumes we have selections from the beginnings of a life’s work, a report from the first half-century, a hint of what is yet to come.They constitute a landmark of scholarship produced by the model scholar..' Economic History Review, Vol. LI 'The most distinguished historian of early modern British imperial overseas trade of this or any earlier generation, Jacob. M. Price has long been known as a historical essayist par excellence. Distinguished by their solidarity, careful and imaginative analysis of data, precision of argument, attention to context, and lucid prose style, his essays have served two generations of early modern British overseas historians as a model of what an essay should be and how it can shed new light upon a field. For that reason, as well as because of the defining importance of many of the essays in several areas of seventeenth- and eighteenth-century imperial history, these three volumes of Price’s collected essays are an especially welcome addition to the proliferating literature on the early modern British world...one has to applaud the press for undertaking a project of this scope and scholarly importance.' The International History Review, Vol. XXI, No. 1

The Atlantic Frontier of the Thirteen American Colonies and States: Essays in Eighteenth-Century Commercial and Social History