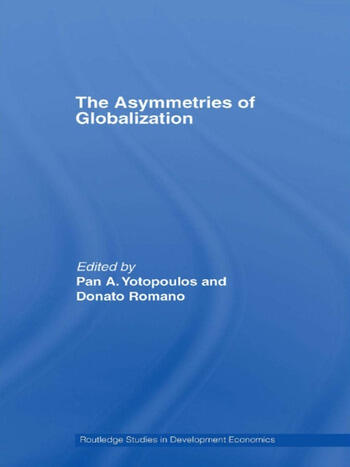 The Asymmetries of Globalization

The discourse on globalization has become polarized. Proponents consider globalization as the silver bullet for targeting growth in the world economy and for poor countries specifically, while opponents see it as the poisoned arrow of exploitation and impoverishment of the Third World.

Splendidly edited, The Asymmetries of Globalization  deals with the 'what' and 'how' but primarily with 'why' globalization has most often negative outcomes for developing countries. It breaks new ground in approaching globalization not only as trade commodities, but also as trade in positional goods ('decommodified trade.')

The two novel and munificent forms of post-Ricardian decommodified trade, trade in services and trade in hard currency in the form of currency substitution, are sculpted in the introductory chapter as the foundation of the systematic asymmetries of globalization. The analytical approach of introducing 'positional goods' in the form of decommodified trade, in the discource on globalization, is original. It is also timely in a situation where the tail of trade in 'services' has grown enough to wag the traditional trade-in-commodities dog of globalization.

The balance of the chapters in this volume constitute a tapestry of case studies that elaborate and empirically investigate the causes of systematic asymmetries of globalization. The book's appeal transcends economics to make it also highly useful to students across the disciplines of sociology and political science, especially in the fields of international political economy and the politics of international trade. It will certainly enlighten all those working in the general areas of globalization, poverty and economic development.

Editors’ Introduction  Part 1: Decommodification: From Trade in Commodities to Trade in Services  1. Asymmetric Globalization: Impact on the Third World  2. Positional Goods and Asymmetric Development  3. Growth and Poverty Reduction under Globalization: The Systematic Impact of Currency Substitution and Exchange Rate Misalignment  4. With Whom to Trade?: An Examination of the Effects of Intra-National and Between-Country Income Inequality on Bilateral Trade  Part 2: Institutional Asymmetries  5. Communities and Markets for Rural Development under Globalization: A Perspective from Villages in Asia  6. Export Outsourcing: Cost Disadvantage and Reputation Advantage  7. Transition Economies and Globalization: Food System Asymmetries on the Path to Free Markets  Part 3: Agricultural Poverty and Decommodification  8. Genetically Modified Seeds and Decommodification: An Analysis Based on the Chinese Cotton Case  9. Globalization and Small-Scale Farmers: Customizing 'Fair-Trade Coffee'  Part 4: Conclusions  10. What Have We Learned About Globalization?

The Asymmetries of Globalization