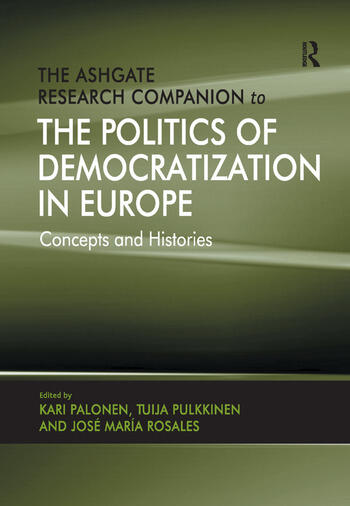 The Ashgate Research Companion to the Politics of Democratization in Europe: Concepts and Histories

'Democratization' is a concept often used in academic book titles, yet not many of them deal with the initial breakthrough of democratization. This research companion presents an alternative view to the widespread assumption that Western democracies should be the normative reference for the study of democratization elsewhere. Rather, it questions the universal validity of such an assumption by searching the history of European politics and by paying specific attention to the struggles of democratization accomplished outside Western Europe. The authors apply a comparative approach to analyzing debates in the primary sources in a number of countries and languages and situate the results into a broader European context. Focusing on European democratization from different historical and analytical perspectives, they discuss the politics, concepts and histories involved in democratization as a complex of changes that has altered the conditions of political action and debate in the continent for the past two centuries.

'Europe is the cradle of modern democracy and the current wave of democratization started there in the mid-1970s. In this wide-ranging and thought-provoking collection experts from all over the continent address both the subtlety and variety of the European experience; essential knowledge if we are to move on from counting votes to understanding how democracy really works.' Peter Calvert, University of Southampton, UK 'This work, the product of several years of collaboration, highlights and explores one important dimension usually missing in democratization studies - the importance of historical influences and precedents. That is the most significant leitmotiv of this publication which it approaches from a wide range of perspectives encompassing the general - such as concepts and ideas - and the particular in the form of national case-studies. Insights and questions are raised that have a relevance for understanding new democracies of today.' Geoffrey Pridham, University of Bristol, UK 'The Ashgate Research Companion to the Politics of Democratization in Europe provides an incisive enquiry into the foundations and evolution of the European democratization experience through a good mixture of specific case studies and conceptual analyses. It promises to be reference reading for scholars and students of political science alike. It also offers valuable insights for practitioners actively involved in the making and remaking of the democratization experience in Europe and elsewhere.' Insight Turkey

The Ashgate Research Companion to the Politics of Democratization in Europe: Concepts and Histories