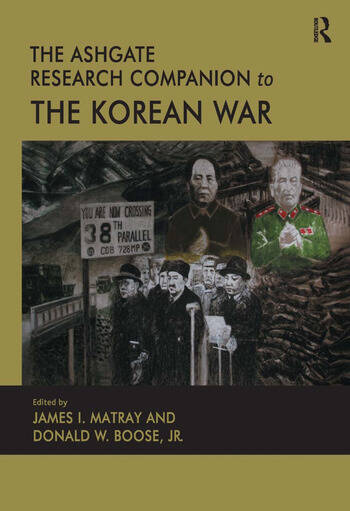 The Ashgate Research Companion to the Korean War

This essential companion provides a comprehensive study of the literature on the causes, course, and consequences of the Korean War, 1950-1953. Aimed primarily at readers with a special interest in military history and contemporary conflict studies, the authors summarize and analyze the key research issues in what for years was known as the 'Forgotten War.' The book comprises three main thematic parts, each with chapters ranging across a variety of crucial topics covering the background, conduct, clashes, and outcome of the Korean War. The first part sets the historical stage, with chapters focusing on the main participants. The second part provides details on the tactics, equipment, and logistics of the belligerents. Part III covers the course of the war, with each chapter addressing a key stage of the fighting in chronological order. The enormous increase in writings on the Korean War during the last thirty years, following the release of key primary source documents, has revived and energized the interest of scholars. This essential reference work not only provides an overview of recent research, but also assesses what impact this has had on understanding the war.

James I. Matray is Professor of History at California State University, Chico. He is the author of The Reluctant Crusade: American Foreign Policy in Korea, 1941-1950 and Korea Divided: The 38th Parallel and the Demilitarized Zone and editor of The East and the United States: An Encyclopedia of Relations Since 1784, Historical Dictionary of the Korean War, and Korea and the Cold War: Division, Destruction, and Disarmament. Donald W. Boose, Jr. is a retired Army colonel who teaches at the U.S. Army War College. Much of his 30-year military career involved Northeast Asia political-military matters and included six years with the U.N. Command Component of the Military Armistice Commission in Korea and service as Assistant Chief of Staff for Strategic Plans and Policy for U.S. Forces, Japan. His books include U.S. Army Forces in the Korean War and Over the Beach: U.S. Army Amphibious Operations in the Korean War.

’At long last, two scholars have presented an edited volume that puts Korea within its historical perspective. By drawing upon some of the finest scholarship presented by a diverse group of scholars, the editors have compiled 32 essays that offer a fresh look at the war ... A significant contribution to the field and a worthy addition to all academic libraries. ... Essential. All levels/libraries.’ Choice ’The Ashgate Research Companion to the Korean War provides a timely and much-needed scholarly reference, for both academic and general readers, to acquire updated knowledge and a deeper understanding of the first major hot war during the Cold War. Edited by two of America’s leading experts on the subject, the volume is comprehensive, informative, and insightful. It is highly commended.’ Chen Jian, Cornell University, USA

The Ashgate Research Companion to the Korean War