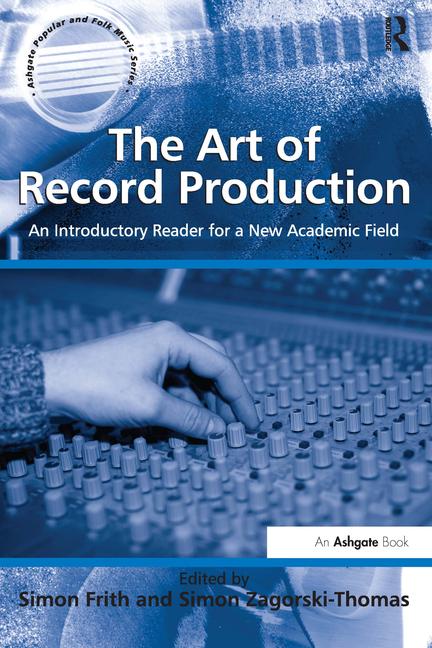 The Art of Record Production: An Introductory Reader for a New Academic Field

The playback of recordings is the primary means of experiencing music in contemporary society, and in recent years 'classical' musicologists and popular music theorists have begun to examine the ways in which the production of recordings affects not just the sound of the final product but also musical aesthetics more generally. Record production can, indeed, be treated as part of the creative process of composition. At the same time, training in the use of these forms of technology has moved from an apprentice-based system into university education. Musical education and music research are thus intersecting to produce a new academic field: the history and analysis of the production of recorded music. This book is designed as a general introductory reader, a text book for undergraduate degree courses studying the creative processes involved in the production of recorded music. The aim is to introduce students to the variety of approaches and methodologies that are currently being employed by scholars in this field. The book is divided into three sections covering historical approaches, theoretical approaches and case studies and practice. There are also three interludes of commentary on the academic contributions from leading record producers and other industry professionals. This collection gives students and scholars a broad overview of the way in which academics from the analytical and practice-based areas of the university system can be brought together with industry professionals to explore the ways in which this new academic field should progress.

Simon Frith is Tovey Professor of Music at the University of Edinburgh and a Fellow of the British Academy. He pioneered the academic study of popular music and also had a long career as a music journalist. He chairs the Judges of the Mercury Music Prize. Simon Zagorski-Thomas is a Senior Lecturer at the London College of Music, University of West London, and is chairman of the Association for the Study of the Art of Record Production. He worked for 25 years as a composer, sound engineer and producer and is, at present, conducting research into the musicology of record production and performance in the studio.

'The Art of Record Production is an impressive, important achievement. Just a glance at the list of contributors - all prominent scholars and practitioners - reveals the value of this volume. But take a closer look and it becomes clear what a thoughtfully produced, methodologically diverse, thoroughly researched, and engaging work this is. The Art of Record Production is an ideal companion for anyone interested in the aesthetic, cultural, musical, and technical aspects of recorded music.' Mark Katz, University of North Carolina, USA 'This is an excellent and stimulating contribution to an understudied area. The book will be welcomed by everybody seriously interested in recorded music. Students in particular will benefit from the broad range of questions and subjects covered in this publication.' Peter Wicke, Humboldt-University Berlin, Germany 'The Art of Record Production is a collection of essays offering significant theoretical contributions and frameworks for a new academic field�... The book takes a significant step forward in establishing theoretical frameworks and also presents a roadmap for further research... enjoyable and informative.' Dancecult: Journal of Electronic Dance Music Culture 'The Art of Record Production is an anthology of sixteen essays, all well written... a good supplement to the already established field of Sound Studies.' ICON

The Art of Record Production: An Introductory Reader for a New Academic Field