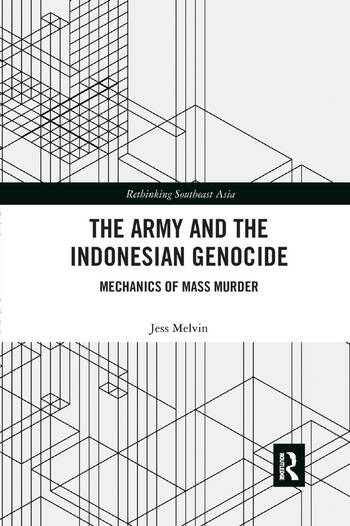 The Army and the Indonesian Genocide: Mechanics of Mass Murder For the past half century, the Indonesian military has depicted the 1965-66 killings, which resulted in the murder of approximately one million unarmed civilians, as the outcome of a spontaneous uprising. This formulation not only denied military agency behind the killings, it also denied that the killings could ever be understood as a centralised, nation-wide campaign.

Using documents from the former Indonesian Intelligence Agency’s archives in Banda Aceh this book shatters the Indonesian government’s official propaganda account of the mass killings and proves the military’s agency behind those events. This book tells the story of the 3,000 pages of top-secret documents that comprise the Indonesian genocide files. Drawing upon these orders and records, along with the previously unheard stories of 70 survivors, perpetrators, and other eyewitness of the genocide in Aceh province it reconstructs, for the first time, a detailed narrative of the killings using the military’s own accounts of these events. This book makes the case that the 1965-66 killings can be understood as a case of genocide, as defined by the 1948 Genocide Convention.

The first book to reconstruct a detailed narrative of the genocide using the army’s own records of these events, it will be of interest to students and academics in the field of Southeast Asian Studies, History, Politics, the Cold War, Political Violence and Comparative Genocide.

2. The Struggle for the Indonesian State

Conclusion: Anatomy of a Genocide

Jess Melvin is Rice Faculty Fellow in Southeast Asia Studies and Postdoctoral Associate in Genocide Studies at the Whitney and Betty MacMillan Center for International and Area Studies at Yale University.

The Army and the Indonesian Genocide: Mechanics of Mass Murder