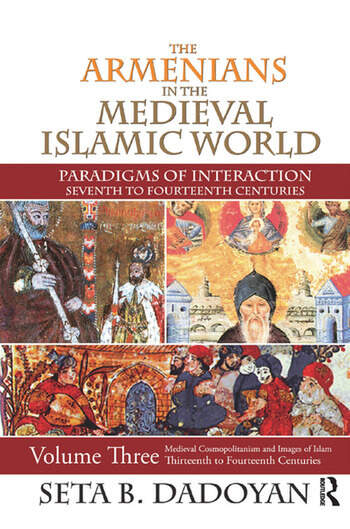 The Armenians in the Medieval Islamic World: Medieval Cosmopolitanism and Images of Islamthirteenth to Fourteenth Centuries

In the third volume of the trilogy, Seta B. Dadoyan focuses on social and cultural aspects, rather than the core political focus exhibited in her first two volumes. Her objective is to suggest political readings of these themes and related texts by revealing hitherto unstudied and novel interactions in the cities of Asia Minor during the Mongol Period.

Dadoyan focuses on the Armenian condition and role in the medieval Islamic world. She argues that if the entire region was the habitat of most of the Armenians, their history too is part of these locations and peoples. Dadoyan draws the outlines of a new philosophy of Armenian history based on hitherto obscured patterns of interaction.

The first three chapters of this volume are dedicated to the images of Prophet Muhammad in Armenian literature. Dadoyan shows that direct interactions and borrowings happened regularly from Islamic sciences, reform projects, poetry, and arts. Dadoyan argues that the cosmopolitan urban environments were radically different from rural areas and close interactions took different and unexpected patterns. In the last part of the volume, she presents the first and only polemical-apologetic Armenian texts addressed to Islam at the end of the fourteenth century. This book is essential for all historians and Middle East scholars and is the latest volume in Transaction's Armenian Studies series.

Part One
Paradigms of Medieval Cosmopolitanism:
The Case of Erznka/Erzinjn Sciences, Society, and Literature in the Thirteenth Century
1 The City of Erznka and the Ism'l Connection
I. Erzinjn/Erznka and Three Levels of Interaction
II. The City of Erznka and the Ism'l Channel
III. Ism'ls, Qarmt.ians, and the Ras'il Ikhwn al-S.af' or Epistles of the Brethren of Purity
IV. The Ras'il: Sources, Objectives, and Content
V. The Doctrine of Brotherhood and Organizational Matters
2 Secularization of Knowledge and Sciences: An Armenian Summary of Ras'il Ikhwn al-S.af'
I. Yovhanns Erznkac'i and Ras'il Ikhwn al-S.af' as Model for His I Takac' Imastasirac' Groc' K'aeal Bank' (Views from the Writings of Islamic Philosophers)
II. Comparative Study of the Views and the Ras'il
A. Classification of the Sciences
B. Epistemology and Logic
C. Man's Knowledge of Himself in Accordance with His Nature
D. Physical Sciences and Metaphysics
E. The Principle of Causality and Theory of Emanation
F. Cosmology, Astronomy, Astrology The Analogy between the World and Man
III. The Philosophical Writings of Yovhanns Erznkac'i in Light of the Ras'il
A. Philosophy and Classification of the Sciences
B. Concept of Man: Constitution and Status The Soul and the Body
C. Man as Soul
D. The Body and the Relationship to the Soul
E. Theory of Knowledge
F. Theory of Morals
G. Social-Political Philosophy
H. Cosmology and Astronomy
3 Project for the Spiritualization and Control of Urban Society:'Abbsid Caliph al-Ns.ir's Futuwwa Project as Model for the Constitution of the Brotherhood of Erznka
I. Caliph al-Ns.ir's Futuwwa Project and the Constitution of the Brotherhood of Erznka
II. The Fat, Manuk, Jawanmard, Aqq/Akh, and Urban Motifs of Manliness
A. The Ah.dth and Fityn in the Near Eastern Cities
B. The Armenian Manuks and Manktawags
III. Caliph al-Ns.ir's Futuwwa Reform: Ideology, Strategy, and Diffusion in Asia Minor
A. Al-Ns.ir's Decree
IV. The Ns.ir Futuwwa and Akhism in Seljuk Asia Minor
V. The Ns.ir Model and the Constitution for the Brotherhood of Erznka
VI. The Constitution Part One: "Definitions and Canons" (Sahman ew Kanonk') and Kitb al-Futuwwa
VII. Additional Canons (Krkin Kanonk') Addressed to Manuks and Manktawags
VIII. The Nir Program and Constitutions in the East European Armenian Communities Fourteenth Nineteenth Centuries
4 Urbanization of Culture The Cultural Significance of the Fityn and Manuks
I. The Contrast: The Reform Projects and the Realities of Urban Society and Its Culture
II. The Medieval Urban Artworld
III. The Urban Coalitions and the Sects: Marginal Communities and Perspectives
IV. Kostandin Erznkac'i: Two Worlds and Two Natures in Man
A. The Concept of Love and Christ: Synthesis of Kostandin and the Controversy
V. Yovhanns and Yakob Manktawag: A Dantean Dialogue
VI. The Later Kostandin

Part Two
The Prophet and Islam in Armenian Literature Seventh to Fourteenth Centuries: Armenian Conceptualization of Islam through Polemics Apologetics
1 Life and Teachings of Prophet Muh.ammad
I. Early Life of the Prophet The Migration (al-Hijrah) and the Mednan Period
A. The Migration or al-Hijrah Muh.ammad at Mednah
II. The Constitution of Mednah
III. The Last Years at Mednah 627/5H 632/11H
IV. The Message of Islam
V. Formation of the Early Islamic Community or the Ummah
2 Islam and the Tradition of Arab-Christian Apologetic/Polemical Literature
I. Islam and Muslim Apologetic/Polemical Literature
II. Christian Apologetic/Polemical Traditions East and West Seventh Fourteenth Centuries
A. Circumstances and Contexts
B. Christian Apologists/Polemicists: Yuh.ann or John of Damascus (d. before 754)
C. Theodore Ab Qurrah (d. 820), Nonnus of Nisibis The Genre of Letters and Epistles
III. Western-Crusader Perspectives Eleventh Thirteenth Centuries
3 The Armenian Mahmet/Muh.ammad
I. The Cycle of Mahmet Legends
II. The Armenian Mahmet and His Teachings
III. Some "Problematiques" of the Armenian Mahmet
4 Grigor and Matt'os: Texts and Polemical Strategies
I. Three Polemical Texts in 1390s by Grigor Tat'ewac'i and Matt'os uayec'i
II. The Role of Late Medieval Monastic Schools in Eastern Armenia
III. Mongol Times in Siwnik' and Polemical Strategies
IV. Grigor, Matt'os and Their Work
A. Heresy in the Triangle of Reason, Social Norms, and Religion The Ner. or Antichrist
B. Matt'os uayec'i Life and Work
V. The Texts and Polemical Strategies
A. Various Responses to the Questions of the Infidels by Matt'os The "Seven Questions"
B. Grigor, nddm Tajkac'(Against the Tajiks) and the Sixteen Fallacies or "Molorut'iwns"
Summary: The Arguments in Volume One
Summary: The Arguments in Volume Two
Summary: The Arguments in Volume Three
Bibliography
Index

The Armenians in the Medieval Islamic World: Medieval Cosmopolitanism and Images of Islamthirteenth to Fourteenth Centuries