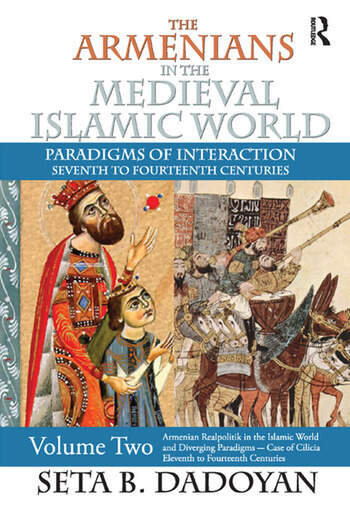 The Armenians in the Medieval Islamic World: Armenian Realpolitik in the Islamic World and Diverging Paradigmscase of Cilicia Eleventh to Fourteenth Centuries

James A. Clapp, Seta B. Dadoyan

In the second of a three-volume work, Seta B. Dadoyan explores the Armenian condition from the 970s to the end of the fourteenth century. This period marked the gradual loss of semi-autonomy on the traditional mainland and the rise of Armenian power of diverging patterns in southeastern Asia Minor, north Syria, Cilicia, and Egypt.

Dadoyan's premise is that if Armenians and Armenia have always been located in the Middle East and the Islamic world, then their history is also a natural part of that region and its peoples. She observes that the Armenian experience has been too complicated to be defined by simplistic constructs centered on the idea of a heroic, yet victimized nation. She notes that a certain politics of historical writing, supported by a culture of authority, has focused sharply on episodes and, in particular, on the genocide.

For her sources, Dadoyan has used all available and relevant (primary and secondary) Armenian sources, as well as primary Arab texts and sources. This book will stimulate re-evaluation of the period, and re-conceptualizing Armenian and Middle Eastern histories.

Contents of Other Volumes in This Series
Transliteration Tables
Prologue
Introduction
1 Bilad al-Sham in the Eleventh and Twelfth Centuries
and the Armenian Intermezzo
I. The Armenian Intermezzo: Argument for the
Classification of the Period as a Unique Phase
II. Emigrations and Settlements in al-Sham in the
Ninth and Tenth Centuries
III. Greeks, Christians, Armenians, Isma'ilis,
Hamdanids, Fatimids, Kalbis, and Kilabis
in al-Sham during the Ninth and Tenth Centuries
IV. Th e Ghuzz/Turkmens and Seljuks in Asia Minor,
Armenia, and al-Sham
A. Early Turkish Penetration and the Armenians
B. Al-Sham in the Eleventh and Twelfth Centuries
C. Th e Ghuzz in Syria
2 Armenian Byzantine and Armenian-Islamic
Realpolitik and Peripheral Principalities
I. Armenian Byzantine Realpolitik and Peripheral
Principalities, Eleventh to Twelfth Centuries
II. The T'ondrakian Isma'ili Connection Gorg,
Lazar, and T'oros as Missing Link "Brigands"
and the Rise of a Heterodox Ruling Class on
the Frontiers
III. Armenian Muslim Realpolitik: Muslim
Armenian Powers
A. The Turkish and Turkmen Attires
1. The Nawiki/Bawiqi/Yaruqi/Awaqis: Amir
Ktric, Ibn Khan, and Aqsiz/Atsiz
2. Th e Danishmandids in Cappadocia 1055/
447H 1173/569H
B. Political Converts among Territorial
Principalities
1. The "State" of Philaretus
2. Bene (or Banu) Boghusaks in Siberek/
Sewawerak 1040 1200
3. The Armenian Nusayri Ruzzaiks/Ruzziks
in Syria
3 The Fatimid Armenians Translations of Islam
into Power
I. The Armenians in Egypt
II. The Involvement of the Pro-Byzantine
Armenian Institutions in Egypt
A. Catholicos Grigor II Vkayaser (or Martyrophil)
Pahlawuni
B. Vizier Bahram al-Armani and Caliph
al-Hafiz an Aborted "Crusade"
III. Muslim Armenian Vizierial Rule, 1074 1163
A. A Hypothesis about the Beginnings of Badr in
Aleppo: Al-Amir'Aziz al-Dawlah
B. The Jamali House of Fatimid Viziers
1. Armenian Turkish Rivalry and the
Vizierate of Badr al-Jamali
2. Abu'l-Qasim al-Afdal Shahanshah Ibn
Badr al-Jamali
3. Abu'Ali Ahmad Kutayfat al-Akmal Ibn
al-Afdal (1131)
C. Abu'l-Fath Yanis al-Rumi al-Armani (1132)
D. The Nusayri Banu Ruzziks and the End of
Armenian Vizierial Rule
1. Abu'l-Gharat Faris al-Muslimin Tala'i' Ibn
Ruzzik (1154/549H 1161/556H)
2. Abu Shuja' Badr ed-Din, al-Nasir Muhyy
ed-Din Majd al-Islam Ruzzik Ibn Tala'i'
(1161 1162)
3. Other Figures Two Karakushs
IV. The Testimony of Architecture
A.Th e Frescos of the White Monastery Links
between the Armenian North and the South
B. Armenian Forms in Fa?imid Egypt
C. Badr's Juyushi Mosque/Mashhad on
Muqattam Hill 1085: Memorial to Power and
Tragedy
D. The "Thousand and One Nights" of al-Afdal
4 The "Dynastic Triangle" or the Second Age of
Kingdoms Diverging Paradigms and the Case of
Armenian Cilicia: Twelfth to Fourteenth Centuries
I. The Dynastic Triangle or the Second Age of
Kingdoms
II. The Mongols: Penetration and Politics
A. The Twelfth Century: Conversions and Social
Change in Asia Minor and North Syria
B. The Zak'arids (or Zak'arians)
C. Mongol Invasions and a New Phase in
Asia Minor
D. The Hypothesis of "Mongol Imperial Ideology"
III. Cilicia Paradigm Case between the East and
the West
A. Four Points as an Introduction to the
Cilician Case
B. Factors in the Making of Armenian Cilicia
C. The Cilician Principality between the
Turks and the Franks
D. Prince Mleh and His Zanki Alliance:
A Counter- Paradigm and the Nawiki/
Yaruqi Connection
E. Cilicia and the Ayyubids
F. The Fall of Jerusalem and the Famous
"Oath of Salad ed-Din to the Armenians
and Christians"
G. The Aftermath: Franks and Armenians
H. The Project of the Latin Armenian Kingdom
IV. The Kingdom and the Church between Latins,
Byzantines, Ayyubids, Mongols, and Mamluks
A. Ecumenism and Politics
B. King Lewon I: Realpolitik, the Cilician Spirit,
and the Kingdom
C. The Latin Armenian Kingdom of Cilicia
between Franks and Muslims
D. Cilicians, Mongols, and Mamluks Het'um
I and Mongol Khans 181
E. The Conquests of Baybars (1261 1271)
F. Church Union Councils and Popular
Dissent the Fall of the Kingdom
5 The Cilician Spiritual and Intellectual Legacy
between the East and the West 197
I. Beginnings in the Eleventh Century in the
North: Narekac'i, Magistros, and Imastaser
A. Grigor Narekac'i: Major Paradigm in
Armenian Dissident Thought
B. Grigor Pahlawuni Magistros and
Secularization of Knowledge
C. Yovhannes Sarkawag-Imastaser Forerunner
of the Second Phase of Armenian Philosophy
II. The Silver Age in a New World: Th eology,
Philosophy, and Arts
A. Cilician Translations and the Armenian
Version of the Chronicle of Michael the Syrian
B. Vkayaser/Martyrophil, Grigor III, snorhali,
Grigor IV Tlay, and Nerses Lambronac'i
III. Church Union and the Predicament of the
Cilicians the Literature
IV. The Theological Philosophical Legacy of
the Twelfth Century
V. New Thinkers: Society, Philosophy, and
Science Aygekc'i, Rabuni, and Herac'i
VI. New Science
VII. New Philosophy: Armenian "Nominalism"
Rabuni in Cilicia and Orotnec'i in the East
VIII. Cilician Aesthetics and New Arts: Poetry
and Painting
A. Poetry and Narekac'i as a Major Influence;
New Visions of God, Man, and Nature;
sarakans
B. The Cilician Art of Miniatures: Roslyn
and Picak as "Nominalists"
Summary: The Arguments in Volume Two
Bibliography
Appendix
Index

The Armenians in the Medieval Islamic World: Armenian Realpolitik in the Islamic World and Diverging Paradigmscase of Cilicia Eleventh to Fourteenth Centuries