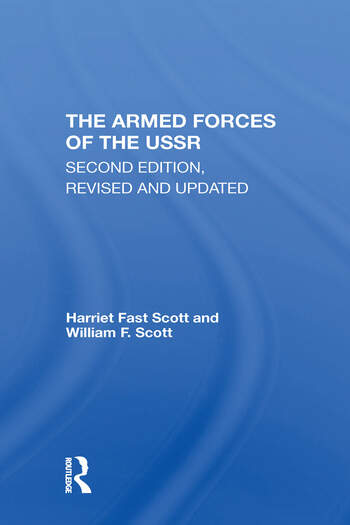 The Armed Forces Of The Ussr

This up-to-date analysis of the development and organization of the Soviet Armed Forces provides a profound insight into the military thinking that has determined the course of Soviet military history from the birth of the first Communist armed forces organization to the present. The eminent authors of this book have drawn on thousands of Soviet Ministry of Defense publications—only a very few of which have been translated into English—and four years of research in the USSR to portray the fundamentals of Soviet military doctrine and strategy. They cover fully the postwar development of the Soviet military, looking at the High Command, each of the five services, combat formations, and supporting agencies, and give a comprehensive account of the Soviet military-industrial complex, military training of Soviet youth, military manpower, mobilization, and the Soviet officer corps. Their discussion of the relationship between the Party and the Armed Forces, based on Soviet data, includes an examination of popular Western myths about internal Soviet military-Party splits. The wealth of detailed information contained in this book includes numerous notes, tables, and figures and a broad range of other data—all based exclusively on primary sources—as well as an extensive bibliography.

"Harriet Fast Scott is a senior research associate at the Center for Advanced International Affairs, University of Miami, and a consultant on Soviet military and political affairs to several major research organizations. Colonel William F. Scott, USAF retired, served two tours of duty in the USSR as senior air attache and also served with the U.S. Department of State and the Defense Intelligence Agency. Dr. Scott is now professor in the Russian Area Studies Program at Georgetown University. The Scotts own the largest private collection of Soviet military publications in the United States."

The Armed Forces Of The Ussr