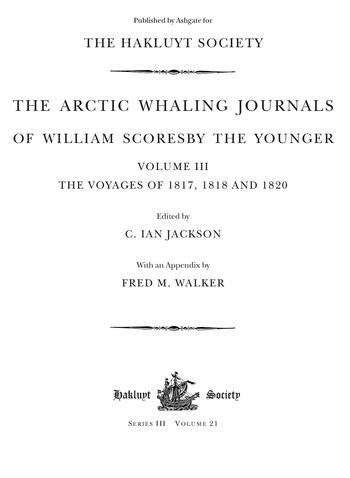 This is the third and final volume in the set of William Scoresby's journals. It contains the unpublished accounts of his three voyages 1817, 1818 and 1820. During the years of the voyages in this volume Scoresby's life changed profoundly. An unsuccessful hunt for whales in 1817 led to a break with the Whitby shipowners, and command of the Fame in 1818 in partnership with his father. The partnership was a brief one, and at the end of 1818 Scoresby broke with his father and moved to Liverpool, finding new partners, completing the writing of An Account of the Arctic Regions and watching the construction of his new ship, the Baffin. Meanwhile he suffered a severe financial loss and made a profound religious commitment. After his first summer ashore for many years in 1819, he brought back to Liverpool in 1820 a 'full ship' of seventeen whales, despite being faced by mutineers in the crew who earlier had been involved in piracy in the Caribbean and, apparently, hoped to seize the Baffin 'and convey her and her valuable cargo to a foreign country'. In each of the journals, Scoresby wrote detailed descriptions of his landings: on Jan Mayen in 1817, western Spitsbergen in 1818, and the Langanes peninsula in northeast Iceland in 1820. The 1817 voyage, when Scoresby and others found the Greenland Sea relatively free of ice, involved him in the renewed British interest in arctic maritime exploration after the Napoleonic Wars. The Introduction to this volume contains a major reappraisal of Scoresby's role, especially in regard to his alleged mistreatment by John Barrow, Second Secretary of the Admiralty. The volume also contains an appendix by Fred M. Walker on the building of wooden whaleships such as the Baffin that were capable of routine ice navigation under sail as far north as 80Â°N, based on Scoresby's account, as Owners' Representative, at the beginning of the 1820 journal.

Ian Jackson was born in Keighly in 1935 and has geography degrees from London and McGill Universities. He was one of four wintering members of the Canadian International Geophysical Year expedition to northern Ellesmere Island in 1957-8 and his account of that year, Does Anyone Read Lake Hazen?, was published by the Canadian Circumpolar Institute Press in 2002. He taught at the London School of Economics from 1959 to 1969, and then occupied a series of environmental and policy planning positions in the Canadian Government in Ottawa. From 1978 to 1981 he was a member of the United Nations Secretariat in Geneva and New York and then Executive Director of Sigma Xi, the Scientific Research Society at its head-quarters in New Haven, Connecticut. He has been a member of The Hakluyt Society since the 1960s, and has served on its Council. He is an Associate Fellow of Timothy Dwight College, Yale University, and his volume in 2000 for the Champlain Society (Toronto) entitled Letters from the 49th Parallel, 1857-1873 was based on material in the Beinecke Rare Book and Manuscript Library at Yale. Volume I of the Scoresby journals appeared in 2003, Volume II in 2008.