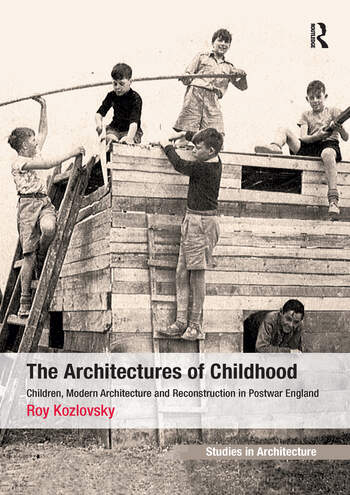 The Architectures of Childhood: Children, Modern Architecture and Reconstruction in Postwar England

Between 1935 and 1959, the architecture of childhood was at the centre of architectural discourse in a way that is unique in architectural history. Some of the seminal projects of the period, such as the Secondary Modern School at Hunstanton by Peter and Alison Smithson, Le Corbusier’s Unité d’Habitation at Marseilles, or Aldo van Eyck’s playgrounds and orphanage, were designed for children; At CIAM, architects utilized photographs of children to present their visions for reconstruction. The unprecedented visibility of the child to architectural discourse during the period of reconstruction is the starting point for this interdisciplinary study of modern architecture under welfare state patronage. Focusing mainly on England, this book examines a series of innovative buildings and environments developed for children, such as the adventure playground, the Hertfordshire school, the reformed children hospital, Brutalist housing estates, and New Towns. It studies the methods employed by architects, child experts and policy makers to survey, assess and administer the physiological, emotional and developmental needs of the ’user’, the child. It identifies the new aesthetic and spatial order permeating the environments of childhood, based on endowing children with the agency and autonomy to create a self-regulating social order out of their own free will, while rendering their interiority and sociability observable and governable. By inserting the architectural object within a broader social and political context, The Architectures of Childhood situates post-war architecture within the welfare state’s project of governing the self, which most intensively targeted the citizen in the making, the children. Yet the emphasis on the utilization of architecture as an instrument of power does not reduce it into a mere document of social policy, as the author uncovers the surplus of meaning and richness of experience invested in these environments at the historical mom

'... it (the adventure playground) now has the scholarly account that it deserves: architectural historian Roy Kozlovsky’s very fine The Architectures of Childhood: Children, Modern Architecture and Reconstruction in Postwar England ... Kozlovsky provides a sympathetic but critical account of adventure playgrounds. He particularly questions the belief that play is a human instinct that surmounts its historical context.' The Architectural Review 'Each chapter is readable and informative in its own right, but what links them together, and what makes Kozlovsky’s study both more ambitious in its scope and more engaging than some of the design-led histories of the architecture the period, are strong theoretical underpinnings'. Journal of Historical Geography 'Roy Kozlovsky’s book ... elegantly and convincingly shows the central place of childhood in England in the years around World War II.' Journal of the History of Childhood and Youth

The Architectures of Childhood: Children, Modern Architecture and Reconstruction in Postwar England