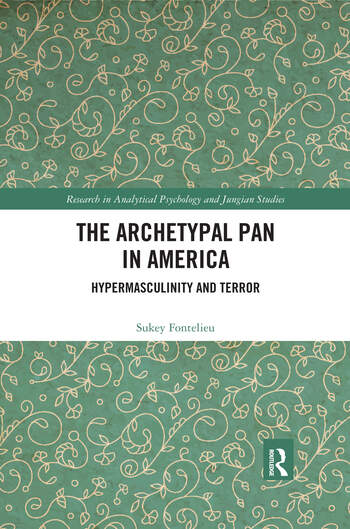 The Archetypal Pan in America: Hypermasculinity and Terror

The Archetypal Pan in America examines the complex moral and ethical dilemmas that Americans have had to face over the last few decades, including the motivations for the Vietnam War; who was in control of women’s productive rights; how to extend civil rights to all; protests for the historically unapologetic narrative of the genocide of Native Americans; and the growing number of school shootings since the Columbine massacre. Fontelieu suggests that the emotional pain these issues created has not resolved and that it continues to surface, in the guise of new issues, but with a similar dysfunctional pattern.

The book argues that this pattern acts in the culture in the same manner as a psychological defense system: stimulating fight, flight, or freeze reactions; requiring great stores of energy when activated; and deflecting attention from other areas. Relying on Jung’s theory of the applicability of myth to psychological problems and the post-Jungian theory of cultural complexes, the myths of the Greek god Pan are used to scaffold a metaphor that informs this pattern. Fontelieu proposes that, rather than looking inward as a culture for how to accept its changing role in a global world, this pattern reinforces dysfunctional emotional responses to the reoccurring traumas of modernity, responses such as an increase in the magnetic appeal of hypermasculinity, or choosing to remain naively self-absorbed.

The Archetypal Pan in America

will be of great interest to Jungian analysts and scholars of depth psychology, as well as academics and postgraduate students studying psychology, foreign studies, literary criticism, politics and cultural studies.

IV Mythos of Pan: Isolation, Innocence, Panic, and the Battlefield

V Rites of Healing and Scapegoating in Antiquity: Metamorphoses

VII Random Shootings: American Reactions to the Massacre at Columbine

IX American Apathy Toward Sexual Violence: Rape in the Military

Sukey Fontelieu, PhD attended the University of Essex and Pacifica Graduate Institute and is currently a professor in the Jungian and Archetypal Studies Program at Pacifica.

The Archetypal Pan in America: Hypermasculinity and Terror