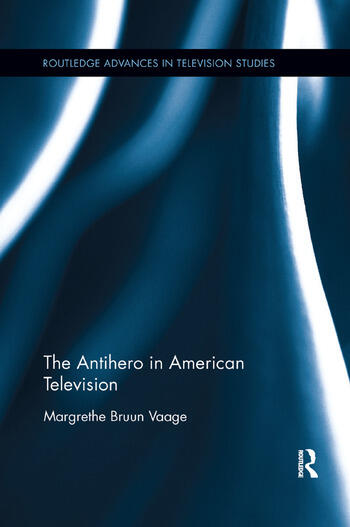 The Antihero in American Television

The antihero prevails in recent American drama television series. Characters such as mobster kingpin Tony Soprano (The Sopranos), meth cook and gangster-in-the-making Walter White (Breaking Bad) and serial killer Dexter Morgan (Dexter) are not morally good, so how do these television series make us engage in these morally bad main characters? And what does this tell us about our moral psychological make-up, and more specifically, about the moral psychology of fiction?

Vaage argues that the fictional status of these series deactivates rational, deliberate moral evaluation, making the spectator rely on moral emotions and intuitions that are relatively easy to manipulate with narrative strategies. Nevertheless, she also argues that these series regularly encourage reactivation of deliberate, moral evaluation. In so doing, these fictional series can teach us something about ourselves as moral beings—what our moral intuitions and emotions are, and how these might differ from deliberate, moral evaluation.

Preface  1. Morally Murky: On Navigating Fictional Worlds by Moral Emotions and Intuitions  2. Partiality: How Knowing Someone Well Influences Morality  3. Suspense and Moral Evaluation: How Engagement Is Shaped by Suspense and Style  4. Why So Many Television Series with Antiheroes? The Attraction of the Antihero's Very Immorality  5. Crossing the Line: On Moral Disgust and Proper Villains in the Antihero Series  6. The Antihero’s Wife: On Hating Skyler White, and on the Rare Female Antihero  Conclusion

Margrethe Bruun Vaage is Lecturer in the Film Department at the University of Kent, UK

"Combining an informative survey of salient research in psychology and philosophical aesthetics with careful conceptual analysis and close examinations of well-known television series, Margrethe Bruun Vaage’s book offers a fresh perspective on the nature of contemporary American television drama and the ways it engages viewers. Exemplifying the virtues of the best interdisciplinary scholarship in the humanities, this book opens up new avenues of research for television studies scholars, cognitivist theorists, and philosophers of film, and will also appeal to any students or scholars with an interest in the question of what makes characters like Tony Soprano and Walter White so compelling." - Ted Nannicelli, University of Queensland, Australia

"In exploring the popularity of the antihero in contemporary US television, Vaage (film, Univ. of Kent, UK) sets out to look specifically at "… the attraction antihero series offer the spectator emotionally and cognitively." Her focus falls primarily on the characters Tony Soprano (The Sopranos) and Walter White (Breaking Bad), although Dexter Morgan (Dexter), Frank and Claire Underwood (House of Cards), Patty Hewes (Damages), and Lester Nygaard and Lorne Malvo (Fargo, season 1) are among other characters Vaage discusses. As befits a work that had its origin as a postdoctoral research project, this is a scholarly treatise, not a popular history of "antihero television." As such, it offers interesting analysis and useful insights into this television genre."

"The Antihero in American Television makes an excellent introduction to the contemporary antihero series, to cognitive film theory, and to more philosophical questions of moral emotions. [...] This will be a seminal study in moral emotions and television drama." --Rikke Schubart, MedieKultur | Journal of Media and Communication Research

"Vaage crosses many disciplinary boundaries to create an account of the moral psychology of fiction and consequently draws attention to the important gap in viewers’ responses to reality and fiction, which is a compelling and stimulating area of research. [...] Her utilization of work from many disciplines creates a text of great interest to film, television, and media and communication scholars, philosophers of aesthetics, audience researchers, and any student fascinated by the complicated, morally suspect worlds of television’s many antiheroes."

The Antihero in American Television