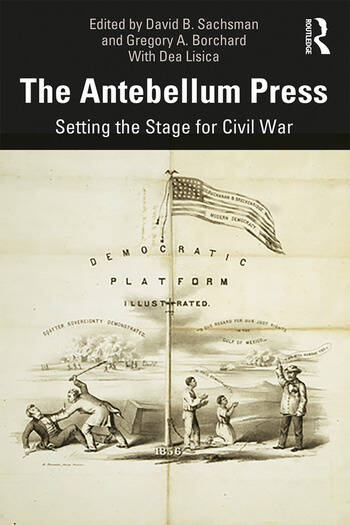 The Antebellum Press: Setting the Stage for Civil War

David B. Sachsman, Gregory A. Borchard

The Antebellum Press: Setting the Stage for Civil War reveals the critical role of journalism in the years leading up to America’s deadliest conflict by exploring the events that foreshadowed and, in some ways, contributed directly to the outbreak of war.

This collection of scholarly essays traces how the national press influenced and shaped America’s path towards warfare. Major challenges faced by American newspapers prior to secession and war are explored, including: the economic development of the press; technology and its influence on the press; major editors and reporters (North and South) and the role of partisanship; and the central debate over slavery in the future of an expanding nation. A clear narrative of institutional, political, and cultural tensions between 1820 and 1861 is presented through the contributors’ use of primary sources. In this way, the reader is offered contemporary perspectives that provide unique insights into which local or national issues were pivotal to the writers whose words informed and influenced the people of the time.

As a scholarly work written by educators, this volume is an essential text for both upper-level undergraduates and postgraduates who study the American Civil War, journalism, print and media culture, and mass communication history.

Newspapers, Agenda Setting, and a Nation Under Stress

The "Irrepressible Conflict" and the Press in the Late Antebellum Period

Part I: Nullification, Abolition, and Division

Disunion or Submission? Southern Editors and the Nullification Crisis, 1830–1833

When the Pen Gives Way to the Sword: Editorial Violence in the Nineteenth Century

An Editorial House Divided: The Texas Press Response to the Compromise of 1850

"The Good Old Cause": The Fugitive Slave Law and Revolutionary Rhetoric in The Boston Daily Commonwealth

Franklin Pierce and the Failure of Compromise: Newspaper Coverage of the Compromise Candidate, the "Nebraska Act," and the Midterm Elections of 1854

Abolitionism, the Kansas-Nebraska Act, and the End of Compromise

"Like so many black skeletons": The Slave Trade through American and British Newspapers, 1808–1865

Part II: The Election of 1856, Dred Scott, and the Lincoln-Douglas Debates

1856: A Year of Volatile Political Reckoning

"More than a Skirmish": Press Coverage of the Lincoln-Douglas Debates

Part III: The Election of 1860 and the Crisis of Secession

The Democrats Divide: Newspaper Coverage of the 1860 Presidential Conventions

Fanning the Flames: Extremist Rhetoric in the Antebellum Press

The Fire-Eating Charleston Mercury: Stoking the Flames of Secession and Civil War

"Our all is at stake": The Anti-Secession Newspapers of Mississippi

War of Words: Border State Editorials During the Secession Period

Learn more about David B Sachsman »

holds the West Chair of Excellence in Communication and Public Affairs. He came to the University of Tennessee at Chattanooga from California State University, Fullerton, where he served as dean and professor of the School of Communications. Previously, he was chair of the Department of Journalism and Mass Media at Rutgers University. Dr. Sachsman is the director of the annual Symposium on the 19th Century Press, the Civil War, and Free Expression. His previous works include The Civil War and the Press (2000), Sensationalism (2013), A Press Divided (2014), and After the War (Routledge, 2017).

a professor in the Hank Greenspun School of Journalism and Media Studies at the University of Nevada, Las Vegas, has written numerous works on journalism history, including A Narrative History of the American Press (Routledge, 2019). Together with David W. Bulla, he is the author of Lincoln Mediated (2015), and Journalism in the Civil War Era (2010). He is also the author of Abraham Lincoln and Horace Greeley (2011) and editor of Journalism History, a quarterly journal published by the Association for Education in Journalism and Mass Communication’s History Division.

The Antebellum Press: Setting the Stage for Civil War