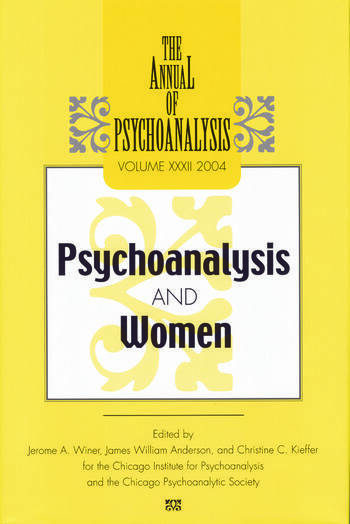 Psychoanalysis and Women, Volume 32 of The Annual of Psychoanalysis, is a stunning reprise on theoretical, developmental, and clinical issues that have engaged analysts from Freud on.  It begins with clinical contributions by Joyce McDougall and Lynne Layton, two theorists at the forefront of clinical work with women; Jessica Benjamin, Julia Kristeva, and Ethel Spector Person, from their respective vantage points, all engage the issue of passivity, which Freud tended to equate with femininity.  Employing a self-psychological framework, Christine Kieffer returns to the Oedipus complex and sheds new light on the typically Pyrrhic oedipal victory of little girls.

Psychoanalysis and Women is an extraordinary chronicle of the distance traveled since Freud characterized women's sexual life as "the dark continent."  The contributors vitalize a half century of theory with the lessons of biography, and they broaden clinical sensibilities by drawing on recent developmental, gender-related, and socio-psychological research.  In doing so, they attest to the ongoing reconfiguration of Freud's dark continent and show the psychoanalytic psychology of women to be very much a revolution in progress.