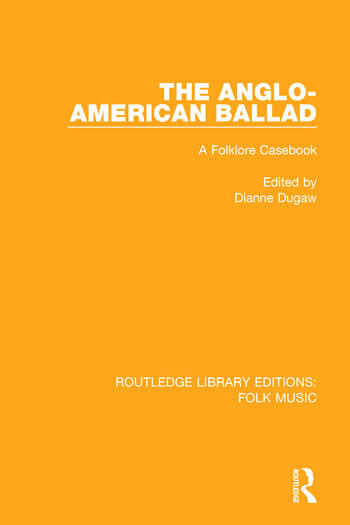 The Anglo-American Ballad: A Folklore Casebook

Originally published in 1995. This book’s collection of key essays presents a coherent overview of touchstone statements and issues in the study of Anglo-American popular ballad traditions and suggests ways this panoramic view affords us a look at Euro-American scholarship’s questions, concerns and methods. The study of ballads in English began early in the eighteenth century with Joseph Addison’s discussions which marked the onset of an aesthetic and scholarly interest in popular traditions. Therefore the collection begins with him and then chronologically includes scholars whose views mark pivotal moments which taken together tell a story that does not emerge through an examination of the ballads themselves. The book addresses debates in tradition, orality, performance and community as well as national genealogies and connections to contexts. Each selected piece is pre-empted by an introductory section on its importance and relevance.

Preface. Introduction 1. Popular Songs and the Image of a Nation: The Spectator Papers on Ballads (Numbers 70 and 85) (1711) Joseph Addison 2. Heroic Ballads and the ‘Romantic Wildness’ of an Anglo-Saxon Past: On Ancient Minstrels (1794) Thomas Percy 3. Countering Mythic Claims: The Origin and Progress of National Song (1783) Joseph Ritson 4. Balladry as a Childhood for National Genius: Popular Poetry (1830) Walter Scott 5. The Concept of Orality and the Collector of ‘Tradition’: Minstrelsy Ancient and Modern (1827) William Motherwell 6. The Ballad Community as an Egalitarian, Pastoral Ideal: Ballad Poetry (1875) Francis James Child 7. Orality, Primitivism, and an Improvising Folk Community: The Ballad and Communal Poetry (1897) Francis B. Gunmere 8. Real Singers, Individual Authorship, and Diverse Ballads: Ballads and the Illiterate (1921) Louise Pound 9. Archaism and ‘Communal Re-creation’ in Ballad Tunes: The Music of the Ballads (1929) Phillips Barry 10. Families of Tunes and the Tenacity of Tradition: Ballad Tunes and Texts (1944) Bertrand H. Bronson 11. Ballad Music as an Heirloom of British Culture: Principal Melodic Families of British-American Folk Song (1950) Samuel P. Bayard 12. Variation and Continuity in Ballads Present and Past: The Comparative Approach (1986) D. K. Wilgus 13. Class Politics and the Producers and Production of Songs: Song and Social Context (1986) Michael Pickering 14. Orality and the Formulaic Composition of Ballads: Oral Tradition and Literary Tradition (1977) David Buchan 15. Creativity, Community, and the Individual Songmaker: My Name is Larry Gorman (1964) Edward Ives 16. People and Their Songs as Diverse Phenomena: Ballad Singers, Ballad Makers, and Ballad Etiology (1973) Eleanor R. Long 17. Tradition, Literacy, and the Ballad Marketplace: The Interface of Oral and Written Forms (1984) Dianne Dugaw 18. Performance, Audience, Social Conditions, and Tradition: The Rise of the English Street Ballad (1990) Natascha Wurzbach 19. Blues Ballads and the Syncretism of Anglo and African Traditions: Survivors of the Ballad Tradition (1984) Paul Oliver

The Anglo-American Ballad: A Folklore Casebook