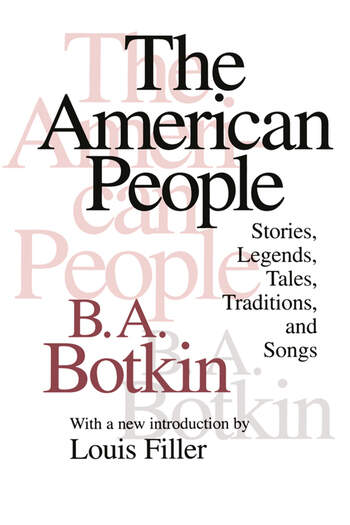 This stimulating anthology, prepared by the great folklorist, B.A. Botkin, is comprised of the traditional songs, stories, customs, and beliefs which have been handed down, by word of mouth, for so long that they seem to have a life of their own. For Botkin, they are at the core of peoplehood.When one thinks of American folklore one thinks not only of the folklore of American life, the traditions that have sprung up on American soil, but also of the literature of folklore, the migratory traditions that have found a home in the New World. Here are the pioneer heroes, legendary and real: the boasters, liars, bad men, good people, and strong people. There are anecdotes, tall tales, cross talk, and jests, full of vigorous good humor. There is a selection of the classic ballads of sailors, miners, cowboys, lumberjacks, and hoboes. Relations between men and women, slave songs of the black people, work songs connected with union struggles, are all herein covered. In The American People, the people speak and are allowed to tell their own story in their own way.The volume is graced by a personal memoir by Louis Filler. The reader learns the background that made Botkin an integral voice in the reconstruction of American folklore. Here, one can read the actual tales of Davy Crockett, Buffalo Bill, Casey Jones, Johnny Appleseed, The Arkansas Traveler, Paul Bunyan, and countless other figures from the past- real and mythic.