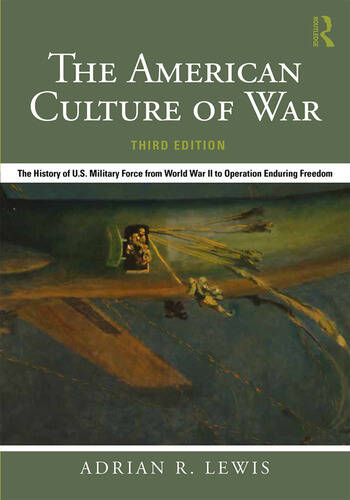 The American Culture of War: The History of U.S. Military Force from World War II to Operation Enduring Freedom

Now in its third edition, The American Culture of War presents a sweeping critical examination of every major American war since 1941: World War II, Korea, Vietnam, the First and Second Persian Gulf Wars, U.S. operations in Iraq and Afghanistan, and the war against ISIS. As he carefully considers the cultural forces that surrounded each military engagement, Adrian Lewis offers an original and provocative look at the motives, people and governments used to wage war, the discord among military personnel, the flawed political policies that guided military strategy, and the civilian perceptions that characterized each conflict. This third edition features:

The new edition of The American Culture of War remains a comprehensive and essential resource for any student of American wartime conduct.

PART I: Tradition and an Envisioned Future Collide

1 War and Culture: An Analytical Approach

3 The Legacy of World War II: Man versus Machine

PART II: The Eff orts to Adapt to a Nuclear World

PART III: The New American Practice of War: War Without the People

11 The Recovery and Reorganization of the Armed Forces of the United States, 1975–1990

Adrian R. Lewis is Professor of History at the University of Kansas. He has taught at the Naval War College and at West Point, and is a retired United States Army Major. He is the author of Omaha Beach: A Flawed Victory.

The American Culture of War: The History of U.S. Military Force from World War II to Operation Enduring Freedom