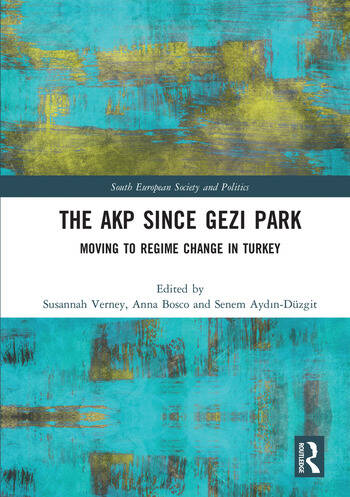 The AKP Since Gezi Park: Moving to Regime Change in Turkey

While the Justice and Development Party (AKP) has dominated Turkish politics for a decade and a half, recent years have seen a qualitative change, culminating in the 2017 referendum on the move to a presidential system. This volume focuses on the later years of AKP rule after the first direct presidential election in 2014. It shows how during this period the AKP has changed the political system and societal dynamics, maintained its electoral predominance, and ultimately opened the way for regime change. This collection of key chapters offers indispensable reading for everyone who wants to understand current Turkish politics and the continued hegemony of the AKP in the country’s political life.

1. Introduction – The AKP on the Road to Presidentialism

3. Islamisation of Turkey under the AKP Rule: Empowering Family, Faith and Charity

4. An Unfinished Grassroots Populism: The Gezi Park Protests in Turkey and their Aftermath

5. Emergence of a Dominant Party System after Multipartyism: Theoretical Implications from the Case of the AKP in Turkey

6. Plus Ça Change Plus C’est le Même Chose: Consolidation of the AKP’s Predominance in the March 2014 Local Elections in Turkey

8. Winds of Change? The June 2015 Parliamentary Elections in Turkey

9. Back to a Predominant Party System: The November 2015 Snap Election in Turkey

10. Taking Sides: Determinants of Support for a Presidential System in Turkey

11. A Small Yes for Presidentialism: The Turkish Constitutional Referendum of April 2017

is Associate Professor of European Integration and European Politics at the National and Kapodistrian University of Athens, Greece, and co-Editor of South European Society and Politics.

is Associate Professor of Comparative Politics, University of Florence, Italy, and co-Editor of South European Society and Politics.

is Associate Professor of International Relations at Sabanci University, Istanbul, Turkey, and Associate Editor of South European Society and Politics.

The AKP Since Gezi Park: Moving to Regime Change in Turkey