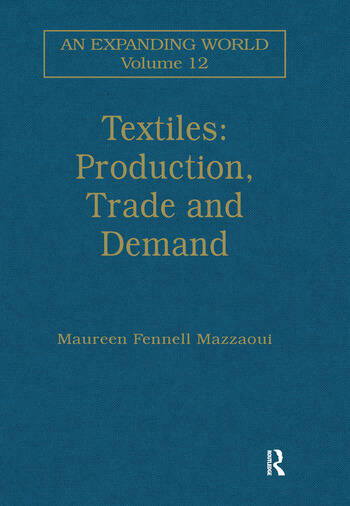 This volume examines the role of textiles within the expanding global economy in the Age of European Exploration. Major themes include: the opening of new markets and responses to competition in the cloth trade, evolving techniques and modes of production, and changes in the patterns of consumption of local and imported cloth in a comparative, cross-cultural context.

'European and Non-European Societies and Christianity and Missions along with the other volumes in An Expanding World should become a standard collection for any academic library. The invaluable bibliography, the variety of themes, and the historical problems will engage students of all levels, undergraduate, graduate, and postdoctoral, in many aspects of early modern and world history for years to come.' Sixteenth Century Journal, Vol. XXX, No. 1 '...a collection of selected essays...of a quite uniformly high quality. The editor has provided an excellent introduction, surveying the broad trends in the historiography of the topic and alerting readers to controversies and conflicting interpretations...the book remains a valuable addition to the literature and provides an impressive summary of current scholarship on the topic.' Economic History Review, Vol. LII, No. 4