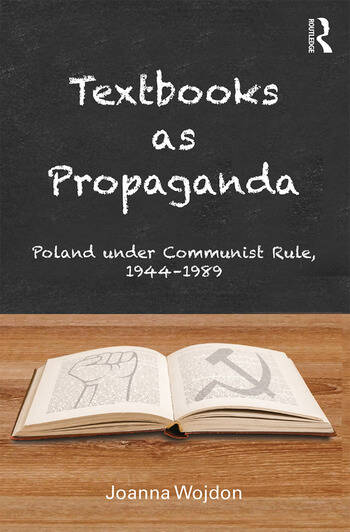 Textbooks as Propaganda analyses post-Second World War Polish school textbooks to show that Communist indoctrination started right from the first grade. This indoctrination intensified as students grew older, but its general themes and major ideas were consistent regardless of the age of the readers and the discipline covered.

These textbooks promoted the new, post-war Poland’s boundaries, its alliance and friendship with the Soviet Union, and communist ideology and its implementation within the countries of the Soviet bloc. Through a thorough analysis of nearly a thousand archival textbooks, Joanna Wojdon explores the ways in which propaganda was incorporated into each school subject, including mathematics, science, physics, chemistry, biology, geography, history, Polish language instruction, foreign language instruction, art education, music, civic education, defense training, physical education and practical technical training. Wojdon also traces the extent of the propaganda, examining its rise and eventual decrease in textbooks as the totalitarian state began its decline.

Positioning school textbooks and textbook propaganda in the broader context of a changing political system, posing questions about the effectiveness of the regime’s educational policies and discussing recent research into political influences on school education, this book will appeal to anyone interested in the history of communist-era propaganda.

7. Foreign Languages and the Arts

Joanna Wojdon is an Associate Professor of History at the University of Wrocław, Poland. Her publications include White and Red Umbrella: Polish American Congress in the Cold War Era (1944-1988) (2015); The World of Reading Primers: The Image of Reality in the Reading Instruction Textbooks of the Soviet Bloc (in Polish: Świat elementarzy: Obraz rzeczywistości w podręcznikach do nauki czytania w krajach bloku radzieckiego) (2015); and E-teaching History (2016, ed.). She is the managing editor of the International Journal of Research on History Didactics, History Education and History Culture: Yearbook of the International Society for History Didactics (vol. 33–37: 2013–2016).