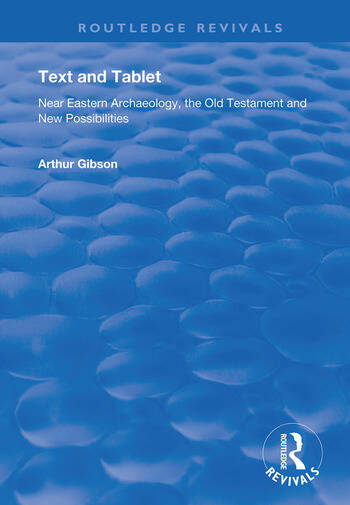 Text and Tablet: Near Eastern Archaeology, the Old Testament and New Possibilities

This title was first published in 2000. Text and Tablet balances a blend of logic, post-analytical philosophy, French philosophy and literary criticism to carefully introduce some of these issues to the reader. Just as writers such as Derrida and Kermode have been interested in relating religion and philosophy to literature, so this book extends the idea of multidisciplinary synthesis to connect ancient and modern issues. Linking philosophy to literature, Old Testament texts and studies, Near East archaeology, and Religious ideas and debates in fresh ways, the author explores ancient texts and sites and developing interpretations of some recent excavations. Addressing issues raised by leading thinkers (Chomsky, Deleuze, Wittgenstein, Renfrew, Barr) on language, life and history, Gibson seeks to challenge many entrenched views based on familiar discoveries and proposes fresh engagement between the interpretation of Old Testament studies and archaeology, using a new, multidisciplinary analysis.

Part One: A Conceptual Framework: Philosophical archaeology and ancient texts; The Old Testament and literary theory; Part Two: Old Testament and Near East interpretation: does Genesis contain 3rd millennium BC text?; Egyptian texts and the Old Testament; Generalizing about the Exodus journey; The Hebrew conflict with Canaan; The sense of opposition in David; Military theology; Babylonian and Aramaic records of Daniel; Conclusion; Bibliography.

Arthur Gibson is a philosopher and a linguist of Near Eastern languages. After some years teaching, acting as a Director of Studies in Philosophy at Cambridge University and a University Proctor, he is currently with the University of Surrey Roehampton, London.

’Text and Tablet brings a logician's insights to bear on Biblical and Near Eastern traditions and on their modern interpreters. A bracing challenge to the negativity that governs much discussion, this book proposes original solutions to a wide range of problems. Significant progress has been made in recent years in archaeological general theory, logical analysis of narrative, literary study, and historical discovery. Exposure of hidden, or partial, assumptions in the Old Testament and Near East religion and archaeology leads to the need to re-interpret their own identities.’ Robert Gordon, University of Cambridge, UK '... Gibson turns his natural...ebullient curiosity on the way our historical understanding and theological approaches to Near Eastern studies have become moribund in a too thick description biased by theological assumptions found in the massive exgetic industry of textual commentaries of OT... Gibon's mind is fecund with suggestive and detailed ways to see old questions in fresh and astounding ways. This work is exceptionally important for academic and seminary collections with a focus on OT exigesis and Near Eastern Archeology. The work also addresses the philosophical issues in such interdisciplinary work.' Word Trade 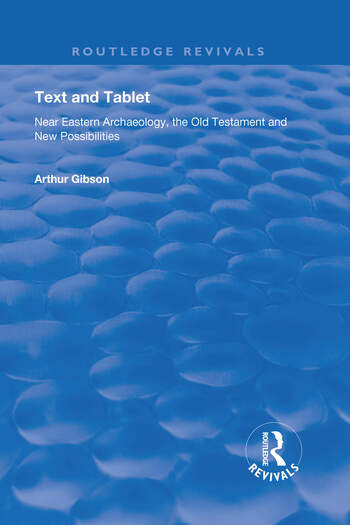 Text and Tablet: Near Eastern Archaeology, the Old Testament and New Possibilities