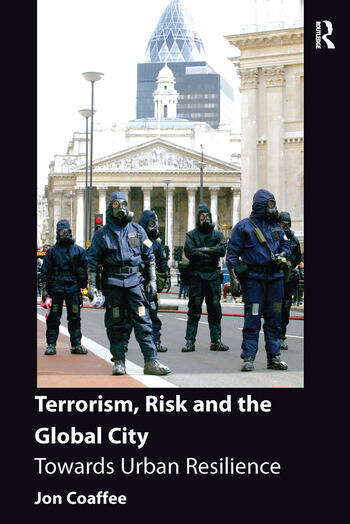 Terrorism, Risk and the Global City: Towards Urban Resilience

First published in 2003, this account of the anti-terrorist measures of London's financial district and the changes in urban security after 9/11 has been revised to take into account developments in counter-terrorist security and management, particularly after the terrorist attack in London on July 7th 2005. It makes a valuable addition to the current debate on terrorism and the new security challenges facing Western nations. Drawing on the post-9/11 academic and policy literature on how terrorism is reshaping the contemporary city, this book explores the changing nature of the terrorist threat against global cities in terms of tactics and targeting, and the challenge of developing city-wide managerial measures and strategies. Also addressed is the way in which London is leading the way in developing best practice in counter-terrorist design and management, and how such practice is being internationalized.

Contents: Preface; Part I Transforming Cities in the Age of Terrorism: Introduction: terrorism, risk and the global city; Urban restructuring and the development of defensive landscapes; Controlling urban security discourse; Risk society, resilient planning, and the global terrorist threat. Part II The City of London's Response: Constructing and reinforcing the ring of steel; Distributing the financial risk of terrorism; Framing, legitimising and negotiating the City's response to terrorist risk. Part III Terrorism, Risk and the Future City: Towards Urban Resilience: Beating the bombers: a decade of counter terrorism in the City of London; Terrorism and future urbanism in the wake of 9/11; London prepared? Resilience, reputation, and the global city; Bibliography; Index.

Jon Coaffee is Chair of Spatial Planning at the Centre for Urban and Regional Studies, Birmingham Business School, University of Birmingham, UK

'A rare piece of quality empirical research in an area drowning in hyperbole, Terrorism, Risk and the Global City cuts to the core of the creeping reorganisation and redesign of cities to address real and purported terrorist threats. Vital reading for anyone concerned with the securitisation of contemporary urban life.' Stephen Graham, Durham University, UK 'This book's original publication provided a benchmark for research about the IRA's campaign against economic targets in London. In this sensitively revised new edition, Professor Coaffee offers fresh insights into a threat that has now assumed global dimensions. It will interest anyone with a serious interest in the planning and management of the contemporary city.' John R. Gold, Oxford Brookes University, UK 'Coaffee's book offers an excellent purview into security planning and its evolution in the wake of multiple bombing campaigns by the IRA and new responses to the threat of both domestic and international terrorism... The author describes the inherent problems in securitising public spaces and achieving balance between public safety and individual and collective rights to privacy.' Urban Geography Research Group '...this book will be of interest to both academic researchers and policy makers who are concerned about the impact of terrorism on major cities and the future of urbanism as a way of life in the post-9/11 world. This research monograph is one of the few books available in the market that presents an engaging discussion on how terrorism is reshaping the contemporary city and its institutions.' Environment and Planning B: Planning and Design '... a thorough and detailed account of planning and development in contemporary cities provides important and stimulating avenues for larger questions facing those who are interested in understanding aspects of terrorism, risk and the very nature of how societies ingest and reflect discourses of terrorist threat in the 21st century. The book is full of em

Terrorism, Risk and the Global City: Towards Urban Resilience