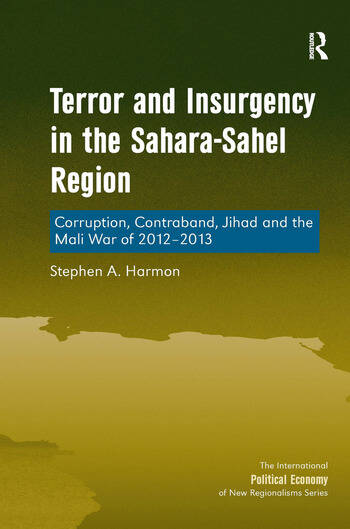 Terror and Insurgency in the Sahara-Sahel Region: Corruption, Contraband, Jihad and the Mali War of 2012-2013

Harmon focuses on terrorism and insurgency in the lawless expanse of the Sahara Desert and the adjacent, transitional Sahel zone, plus the broader meta-region that includes countries such as Algeria, Mali, and Nigeria, and to a lesser extent, Niger and Mauritania. Covering such issues as Islamist terrorism, border insecurity, contraband, and human trafficking, this book looks at the interrelated problems of political and social pathologies that affect terrorist movements and security in the region. A valuable publication, it treats a series of related problems on the basis of a broadly defined area, with a special emphasis on the role of Islam as both a moderating and exacerbating factor. The book has a broader appeal than more narrowly focused country studies that derive from the perspective of only one problem such as terrorism or border insecurity.

’Harmon tells a scary story of how March 2012 brought Mali to the forefront of the War on Terror�. His integrated historical and contemporary analysis is enriched with on-the-spot� interviews cross-cutting Malien society. We experience a blended view of crisis, unfolding regionally, politically and personally. This insight into Mali’s horrific experience is essential to understanding the instability North and West Africa continues to fear, according to Harmon, with reason.’ E. Ann McDougall, University of Alberta, Canada ’In a book that will end up on more than one desk in Washington, Stephen Harmon makes sense of today’s news and prepares the reader for tomorrow’s. Harmon's study reveals what borders conceal: that the region of the Sahara-Sahel shares a troubled past and an ominous future.’ Gregory Mann, Columbia University, USA By emphasizing the voices of Malian civilians, militants, and public officials throughout his analysis of the Mali War, Harmon reminds us that the regional problems and dysfunctions discussed in earlier chapters of this book have very real and tangible impacts on the everyday lives of Africans in Algeria, Mali, Nigeria, and neighbouring countries. Terror and Insurgency in the Sahara-Sahel Region offers an excellent and accessible introduction to anyone interested in this complex and constantly changing part of the world, and is an insightful analysis of how recent events in Mali may offer valuable lessons for how to better approach the search for peace and security in Africa, particularly as Boko Haram maintains a violent presence in Nigeria. LSE Review of Books

Terror and Insurgency in the Sahara-Sahel Region: Corruption, Contraband, Jihad and the Mali War of 2012-2013