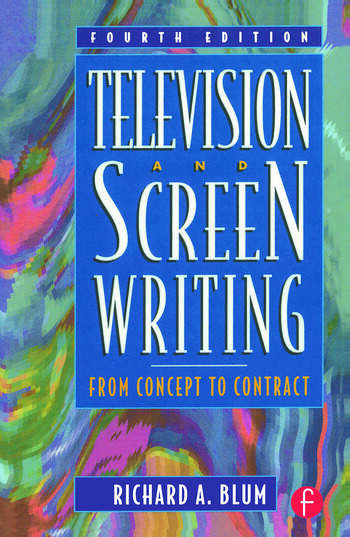 Television and Screen Writing: From Concept to Contract

Now in its fourth edition, Television and Screen Writing: From Concept to Contract is a classic resource for students and professionals in screenwriting and television writing. This book will teach you how to become a creative and marketable writer in every professional arena - including major studios, production companies, networks, cable and pay TV, animation, and interactive programs. Specific techniques and script samples for writing high-quality and producible "spec" scripts for theatrical motion pictures, the sitcom series, one-hour dramatic series, longform television, soaps, talk show, variety, animation, interactive and new media are provided. Television and Screen Writing: From Concept to Contract, Fourth Edition also offers a fully detailed examination of the current marketplace, and distinct strategies for marketing your scripts, from registering and copyrighting the script to signing with an agent.

This new edition has been expanded to include the most up-to-date creative and professional script samples, marketing resources, and practical information possible. The companion website offers a wide range of contacts and resources for you to explore, and Internet links to professional resources. There is also an Annotated and Selected Bibliography for your reference

"This book covers everything from story structure to pitching strategies and sample contracts." --- Hollywood Scriptwriter, April 2001"What a great resource! I'm a screenwriter, a former development executive, and a teacher at a top communications school. I've read all of the screenwriting books, even written one myself, but have seen few that compare to the latest edition of Television And Screen Writing. Featuring everything from pitching strategies, to sample contracts, to statistics on recent script sales, to discussions about soap, interactive, and nonfiction writing, this book is a resource that ALL writers will want to keep close to the keyboard. Thank you, Richard Blum!"--- Evan Smith, author of Writing Television Sitcoms"They say you can't have it all but this book has just that: everything you need to know about writing for film and television. Beyond profound insights into theory and analysis, here are also important nuts-and-bolts considerations that turn real writers into reel writers. Written in language that is itself clear as light, the new edition expands Professor Blum's substantial contribution to the field." ---Professor Richard Walter, author, Escape From Film School: a Novel, UCLA Screenwriting Chairman"This is a terrific book if you want to learn about full-length screenplays, half-hour comedies and one-hour dramas from start to finish. A rare all-inclusive resource."- David Sacks Senior Vice President Current Programming, Warner Bros. Television

Television and Screen Writing: From Concept to Contract