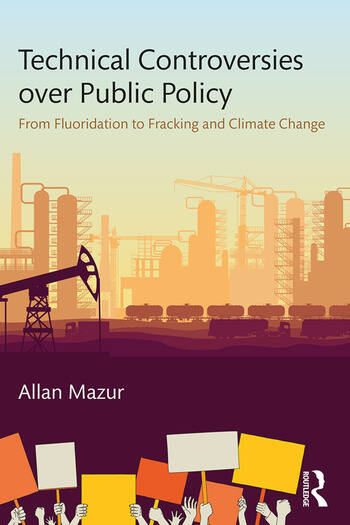 Technical Controversies over Public Policy: From Fluoridation to Fracking and Climate Change

Newspapers and TV often report controversial risk warnings over technological innovations, scientific developments, or environmental hazards that have at their core a dispute between experts who contradict one another not only on preferred policy but also on the scientific facts that underlie decisions about public policy. Recent examples are the disputes about climate change, fracking, vaccination and autism, and genetically modified organisms (GMOs). Adversaries mobilize constituents with similar interests or ideologies, form opposing coalitions, and compete for media exposure. They articulate arguments and counterarguments. "Facts" become malleable, differently appraised by each side. Uncongenial evidence is ignored or discredited. For many adversaries, winning the policy argument is primary; evaluating the true degree of hazard is secondary. How can we determine which side’s "facts" are right and which wrong? Do news media enlighten the public or worsen polarization? Can policymakers deal with controversial science and technology more cogently than they do now?

1. The Controversy over Climate Change

2. Technical Controversies May Be Good, If They End Well

Part II. The Age of Heroic Engineering and the Age of Technical Controversy

3. The Age of Heroic Engineering

4. The Age of Technical Controversy

Allan Mazur is Professor of Public Affairs at the Maxwell School of Syracuse University. He is a fellow of the American Association for the Advancement of Science.

This study of major public, technical controversies is done by a veteran craftsman of sociological and scientific reasoning. Allan Mazur depends first and foremost on scientific and technical understanding, recognizing that experts can disagree on scientific facts and public policy while reflecting his appreciation of these controversies’ dynamics as the inevitable result of progress. Mazur successfully carves out a place in the public debate neither as a partisan nor as a polemicist but rather as an honest broker and sage observer of history and the contemporary scene.

In Technical Controversies in Public Policy, Allan Mazur has written comprehensive accounts of most of the major public science controversies of the past half century and shows how political, ideological, and value-based factors displace or overwhelm conclusions based on scientific evidence. He argues that although asserting "correct" information is unlikely to change embedded views, journalists and authoritative people can improve public understanding by setting the record straight in a manner that reduces the polarizing heat of controversy.

, American Association for the Advancement of Science Among the diverse subjects Allan Mazur has studied during his long and productive career, technical controversies are a recurring theme. In Technical Controversies over Public Policy, he expands substantially on his earlier work explaining the roots, benefits, and costs of technical controversies – especially global climate change – and takes a less sanguine approach to the impacts of such controversies on policy in this era of "truthiness" and increasing political polarization. This book tells a critically important story and deserves to be read by a broad audience: the academic community, policymakers, the media, and the public.

Technical Controversies over Public Policy: From Fluoridation to Fracking and Climate Change