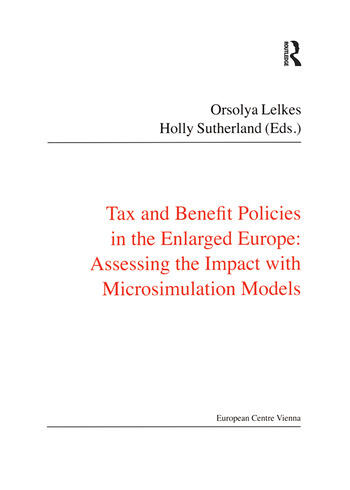 Tax and Benefit Policies in the Enlarged Europe: Assessing the Impact with Microsimulation Models

This book offers the first systematic assessment of income redistribution in Eastern Europe, within a comparative European perspective, and it demonstrates the future research potential of microsimulation techniques in this region. The book's chapters are based on a unique instrument -- EUROMOD: the European tax-benefit microsimulation model, which has been enlarged to include Estonia, Hungary, Poland, Slovenia and other countries. Tax-benefit models such as EUROMOD are computer programmes based on household micro-data, which calculate each household's disposable income. Microsimulation can be used to evaluate the impact of current taxes and benefit policies on individuals' incomes and work incentives. In addition, the model is designed to answer 'what if' questions about different policy reforms, allowing the potential effects of proposed changes to be studied before their actual implementation. EUROMOD goes one step further in the process of helping policy design, in allowing international comparisons between EU countries. This book offers an important demonstration of the effectiveness of tax-benefit models in presenting complex information in a concise and comprehensible way. It discusses what the barriers to their adoption to date have been and it looks at the possibilities EUROMOD offers to future policy-making in Europe.

Orsolya Lelkes is an Economic Policy Analyst and Research Fellow at the European Centre for Social Welfare Policy and Research. She is also a research affiliate at the Centre for Analysis of Social Exclusion (CASE) at the London School of Economics. From 2002 to 2005 she was the head of the Economics Research Unit at the Ministry of Finance in Hungary and the national representative at the Council of Europe Economic Policy Committee in Brussels. Holly Sutherland is a Research Professor at ISER, University of Essex. She has 25 years experience in designing, building and using tax-benefit models. She has published widely in economics and social policy journals and she is the co- author (with G. Redmond and M. Wilson) of The Arithmetic of Tax and Social Security Reform and the co- editor (with L. Mitton and M. Weeks) of Microsimulation Modelling for Policy Analysis: Challenges and Innovations.

'The appropriate collection of published studies in Part II and III make the book interesting for a broader audience by providing an overall view on the possible applications of the model...At the same time, the in-depth analysis in individual chapters is interesting for economists and social scientists working in the field of tax and benefit policies....this book is interesting for the broader community and should be read by the experts of tax-benefit policies' The Journal of Artificial Societies and Social Simulation 'The authors are to be congratulated on a most useful book, but even more on the model-building and research projects which it's all about.' Citizen's Income

Tax and Benefit Policies in the Enlarged Europe: Assessing the Impact with Microsimulation Models