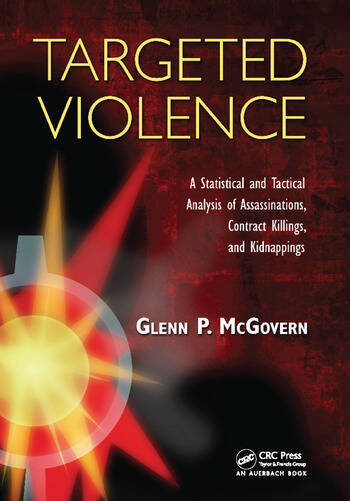 Targeted Violence: A Statistical and Tactical Analysis of Assassinations, Contract Killings, and Kidnappings

Drawn from case examples of incidents from around the world, Targeted Violence: A Statistical and Tactical Analysis of Assassinations, Contract Killings, and Kidnappings is the most complete resource of information on the attack methodologies, tactics used, and groups responsible for targeted killings and kidnappings. The author, a former SWAT and JTTF team member—whose experience includes providing protection to diplomats, high-ranking military personnel, prosecutors, and organized crime informants—presents a wealth of global statistics on assassinations, contract killings, and kidnappings that have occurred from 1950 to the present.

Leaving no stone unturned, the book breaks down the various incidents of targeted violence by region, country, month, day of the week, and time of day. It reports on likely locations for each type of attack, success rates, who is likely to initiate the attacks, and who they are most likely to target. The book’s easy-to-follow format allows readers, experienced or not in personal protective work, to determine the types of attacks known to have occurred in any region.

This complete reference includes 35 case studies that examine attacks on motorcades and pedestrians dating back to 1973—highlighting the lessons to be learned from each example. It analyzes the modus operandi of individual assailants and groups in order to determine commonalities between targeted victims and why certain groups tend to target a specific type of individual. The text concludes with a chapter on victimology.

Just like anyone, assassins and hit men fall into routines and can become creatures of habit. By studying and understanding the collection of historical information contained in these pages, security, military, and law enforcement professionals responsible for providing protection will be better prepared to identify potential threats and develop the tactics needed to thwart such attacks.

Glenn McGovern, district attorney investigator, Special Deputy U.S. Marshal, police officer, deputy sheriff, law enforcement specialist, began his law enforcement career in 1986 as an eighteen-year-old member of the U.S. Air Force Security Police. It was here that he first began his studies of terrorism, tactical operations, and protective details. Europe, at the time, was on fire as groups such as the Sicilian mafia, November 17, Red Army Faction, Hizbollah, and many others were conducting their terrorist attacks. As a newly minted law enforcement member who was also assigned to a police unit that had a combat mission and was deployable worldwide, the study of the tactics used by these groups was mandatory. It was during this time that he had his first introduction to close personal protection operations, first with Soviet diplomats visiting under the SALT II treaties, then later in  Panama with the commanding general of all U.S. forces in South America. He was also involved in an unusual protective operation in that he was locked in with the protectee, which in this case was over $16 million in cash en route to the U.S. military installations in the Pacific.

Upon completion of his military service, he went to work for the Orange County Marshal’s Department, assigned to courthouse security as well as bailiff functions. Upon completing the sheriff’s academy, he was assigned as a deputy sheriff working in the jails. Approximately two years later he obtained a position with the Pacific Grove Police Department in Monterey County. While there he worked as a patrolman, detective, and corporal. He also held a collateral assignment as a member of the SWAT team. Although the Pacific Grove Police Department was small, as were many of the departments on the coast, being on one of only three SWAT teams in the entire county, he had the opportunity to participate in a variety of operations, from hostage situations to barricaded gunmen to many high-risk search/arrest warrant services. This assignment also led to his next major experience in providing protection, this time to President Clinton and Vice President Al Gore, along with both first ladies, during a visit to the Stanford Ocean Research facility.

He later took a job with the Bureau of Investigation of one of the largest district attorney’s offices in California, where he remains to this day. Here he quickly became a member of the Special Operations Group tasked with protective operations for district attorney staff, primarily prosecutors, as well as victims and witnesses. It was as a member of this group that he became more involved in the nuances of protective work as well as the training of a protective team. In particular, providing protection to victims and witnesses involved an issue that most protective teams don’t generally have to deal with. At times, the witness being protected was a member of an organized prison gang. As a member of the gang, even on the “outs” that person was in a position to see the methods of operation, equipment, members of the team, and how they operate. As anyone who has worked organized crime, and gangs in particular, can attest, it doesn’t take much for a gang member to get back in the good graces of his or her gang, and as a result, bringing with him or her the inside knowledge of the protective operations of the DA’s office.

While with the district attorney’s office, he was assigned full-time to the FBI’s Joint Terrorism Task Force as a Special Deputy U.S. Marshal conducting international terrorism investigations for a period of three years. In this assignment he conducted counterterrorism investigations into a variety of groups, including some that have carried out targeted killings. He also was able to attend training that included the construction and detonation of a 500 lb vehicle car bomb, as well as dealing with suicide bombers, which provided him unique insight into how these operations could be carried out. He holds a bachelor’s degree in criminal justice from the Union Institute in Ohio as ell as a certificate in crime and intelligence analysis from the California State University, Sacramento. He is the author of several articles dealing with intelligence and SWAT-related subjects as well as a bimonthly online publication of urban ambush case studies. He also speaks on the issue of protective operations, specifically the tactics employed in these types of attacks.

Author Glenn P. McGovern has aggregated 900 incidents spanning from 1950 through 2008. These attacks include assassinations, contract killings, and kidnappings perpetrated around the world. He provides a global statistical breakdown of these incidents regionally and globally, further broken down by the month, day of the week, and hour in which the attack took place. Amazingly, this analysis reads well and is presented in an easy-to-understand format, making it simple for the reader to put the data in practical perspective.

One of the book's more interesting sections addresses attack methodologies, closely examining the primary tactic or technique employed by attackers attempting assassinations, contract killings, or kidnappings. Other sections deal with the methods of operation and victimology, breaking down terrorist groups, past and present, and looking at those targeted.The book's final sections feature 35 case studies examining attacks on motorcades and pedestrians dating back to 1973. McGovern offers a complete analysis after each case study. Targeted Violence is a study well worth reading for all security, executive protection, and asset protection professionals. Each of us, regardless of level, must be able to both identify and compromise these threats.
— Frederick D. "Rick" Arons, CPP, CRT, President and CEO of American Eagle Investigations & former member of the U.S. Army Special Forces, in Security Management, March 2011 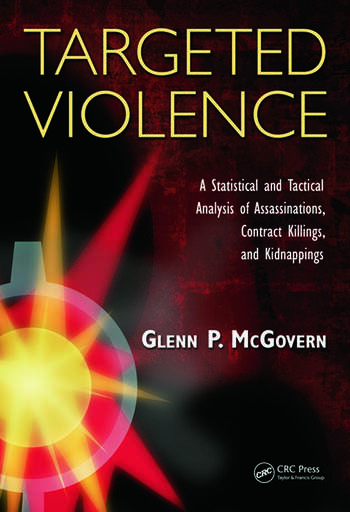 Targeted Violence: A Statistical and Tactical Analysis of Assassinations, Contract Killings, and Kidnappings