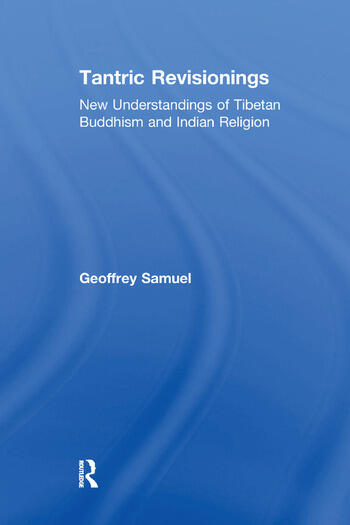 Tantric Revisionings presents stimulating new perspectives on Hindu and Buddhist religion, particularly their Tantric versions, in India, Tibet or in modern Western societies. Geoffrey Samuel adopts an historically and textually informed anthropological approach, seeking to locate and understand religion in its social and cultural context. The question of the relation between 'popular' (folk, domestic, village, 'shamanic') religion and elite (literary, textual, monastic) religion forms a recurring theme through these studies. Six chapters have not been previously published; the previously published studies included are in publications which are difficult to locate outside major specialist libraries.

Contents: Preface; Part I Starting Points: Introducton; Tibet as a stateless society and some Islamic parallels. Part II Historical: The dissenting tradition of Indian Tantra and its partial hegemonisation in Tibet; Tibetan Tantra as a form of Shamanism: some reflections on the Vajrayana and its Shamanic origins; Buddhism and the state in 8th century Tibet; Shamanism, Bon and Tibetan religion; The Indus valley civilisation and early Tibet; Ge-sar of gLing: the origins and meaning of the east Tibetan epic. Part III Religion in Contemporary Asia: Tibet and the southeast Asian Highlands: rethinking the intellectual context of Tibetan studies; The Vajrayana in the context of Himalayan folk religion; The effectivenss of goddesses, or, how ritual works; Women, goddesses and auspiciousness in south Asia. Part IV Buddhism and Other Western Religions: Tibetan Buddhism as a world religion: global networking and its consequences; The westernisation of Tibetan Buddhism; The attractions of Tantra: two historical moments. Index.

Geoffrey Samuel is Professor of Anthropology at the University of Newcastle, NSW. After training in physics at Oxford, he undertook a PhD in social anthropology at Cambridge, carrying out field research on religion and society with Tibetans in Nepal and India in 1971-72. Subsequent fieldwork has included several further research trips to India, Nepal and Tibet, and shorter visits to other Asian societies. He joined the University of Newcastle in 1978 after teaching in the UK, New Zealand and Queensland. From 1995 to 1997, he was Professor of Religious Studies at Lancaster University, where he remains an Honorary Professor. He returned to Australia in 1998. His publications include two books, Mind, Body and Culture: Anthropology and the Biological Interface (1990) and Civilized Shamans: Buddhism in Tibetan Societies (1993). He edited Tantra and Popular Religion in Tibet (1994, with Hamish Gregor and Elisabeth Stutchbury), Nature Religion Today (1998, with Joanne Pearson and Richard H. Roberts), and Healing Powers and Modernity: Traditional Medicine, Shamanism, and Science in Asian Societies (2001, with Linda Connor).

’... the ideas in each chapter are clearly explained, with reference to previous scholarship in relevant areas, so that the book could easily stand in its own right as an introduction to Samuel's thought and, therefore, may be useful to undergraduate and postgraduate students.’ Religions of South Asia