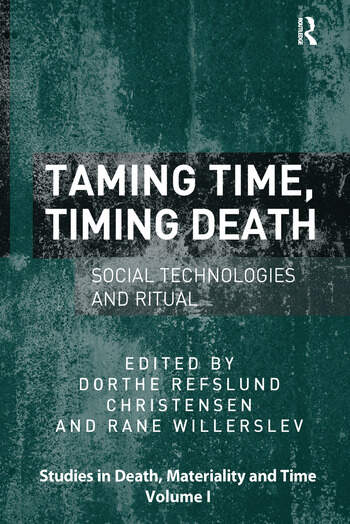 Departing from a persisting current in Western thought, which conceives of time in the abstract, and often reflects upon death as occupying a space at life's margins, this book begins from position that it is in fact through the material and perishable world that we experience time. As such, it is with death and our encounters with it, that form the basis of human conceptions of time. Presenting rich, interdisciplinary empirical studies of death rituals and practices across the globe, from the US and Europe, Asia, The Middle East, Australasia and Africa, Taming Time, Timing Death explores the manner in which social technologies and rituals have been and are implemented to avoid, delay or embrace death, or communicate with the dead, thus informing and manifesting humans' understanding of time. It will therefore be of interest to scholars and students of anthropology, philosophy, sociology and social theory, human geography and religion.

Dorthe Refslund Christensen is Associate Professor of Cultural Studies at Aarhus University, Denmark. Rane Willerslev is Professor of Anthropology and Director of the Museum of Cultural History at the University of Oslo, Norway. He is author of Soul Hunters: Hunting, Animism and Personhood among the Siberian Yukaghirs and On the Run in Siberia.

’The most important and original treatment in decades of a perennial and widely investigated ethnographic topic: the key importance within many cultures of orientations toward the death of their members as the social technology structuring so many aspects of life. It is the counterweight to the fashion for focusing exclusively on the temporality of emergence. Through rich cases and meticulous, ingenious comparative framing, this volume vibrantly renews classic issues for contemporary anthropological thinking.’ George E. Marcus, University of California, Irvine, USA ’Ranging from Ancient Egypt to the Age of the Internet and from war-related reburials in Uganda to contemporary witch killings in the Pacific, this volume presents a wealth of fascinating case studies about how people confront the reality of death in culturally very distinct ways. At the same time the books develops the important insight that the concrete material practices surrounding death are closely linked to and constitutive of human conceptions of time.’ Ton Otto, University of Aarhus, Denmark 'The anthropology of death has a distinguished history, and this volume readily takes its place alongside such classics as Bloch and Parry’s Death and the regeneration of life (1982) and Huntington and Metcalf’s Celebrations of death (1979). ... I am delighted to see a new generation of anthropologists injecting new possibilities into the discipline by engaging with Deleuze’s notions of time. I expect this book to be a staple on both anthropology and archaeology reading lists for some time.' Journal of the Royal Anthropological Institute