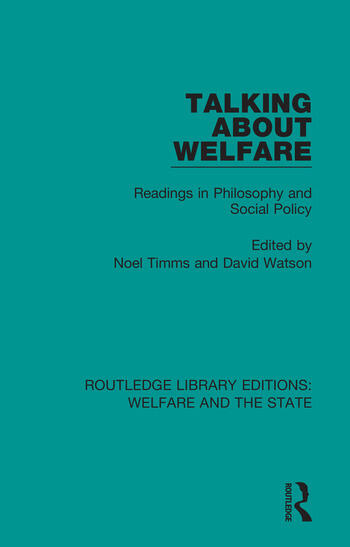 Talking About Welfare: Readings in Philosophy

Originally published in 1976 Talking About Welfare is a collection of essays providing a general survey of the problems facing social welfare. The book introduces a number of philosophers, social workers and social administrators, concentrating on problems in describing a general philosophical orientation to social work, what it means to understand another person, and to problems in describing and justifying social work and social welfare activity. The essays collected contribute to discussion of a wide range of welfare issues, principally that of personal and social welfare, the moral justification of welfare provision, and conceptions of community.

1. The Right to Welfare, T.H. Marshall

2. The Concept of Welfare, Richard B. Brandt

10. The Concept of Community, John Benson

11. The Function of Social Work in Society, Peter Leonard

12. The Art and Science of Helping, Alan Keith-Lucas

13. Knowing by Living Through, Dorothy Walsh

14. On Not Being Judgmental, Ian T. Ramsey

Talking About Welfare: Readings in Philosophy