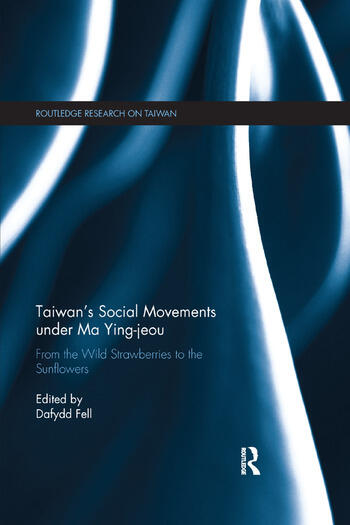 Taiwan's Social Movements under Ma Ying-jeou: From the Wild Strawberries to the Sunflowers

In the spring of 2014, the Sunflower Movement’s three-week occupation of the Legislative Yuan brought Taiwan back to international media attention. It was the culmination of a series of social movements that had been growing in strength since 2008 and have become even more salient since the spring of 2014. Social movements in Taiwan have emerged as a powerful new actor that needs to be understood alongside those players that have dominated the literature such as political parties, local factions, Taishang, China and the United States.

This book offers readers an introduction to the development of these social movements in Taiwan by examining a number of important movement case studies that focus on the post 2008 period. The return of the Kuomintang (KMT) to power radically changed the political environment for Taiwan’s civil society and so the book considers how social activists responded to this new political opportunity structure. The case chapters are based on extensive fieldwork and are written by authors from a variety of disciplinary backgrounds and methodological approaches; in some cases authors combine being both academics and activists themselves. Together, the chapters focus on a number of core issues, providing the book with four key aims. Firstly, it investigates the roots of the movements and considers how to best explain their emergence. Secondly, it examines the development trajectories of these movements. Thirdly, it looks at the best way to explain their impact and development patterns, and finally it assesses their overall impact, questioning whether they can be regarded as successes or failures.

Covering a unique range of social movement cases, the book will be of interest to students and researchers interested in Taiwanese society and politics, as well as social movements and civil society.

1. Social Movements in Taiwan after 2008: From the Strawberries to the Sunflowers and Beyond Dafydd Fell

Part I: Wild Strawberries to the Sunflowers

6. This land is your land? This land is MY land: Land Expropriation during the Ma Ying-jeou Administration and Implications on Social Movements Ketty W. Chen

7. The Sunflower Movement: Origins, Structures and Strategies of Taiwan’s Response Against the Black Box André Beckershoff

8. The China Factor and Taiwan’s Civil Society Organizations in the Sunflower Movement: The Case of the Democratic Front against the Cross-Strait Service Trade Agreement Hsu Szu-chien

9. The Evolution of the Anti-nuclear movement in Taiwan since 2008 Simona Grano

10. The Revival of Taiwan’s Green Party after 2008 Dafydd Fell and Peng Yen-wen

11. Rising from the Ashes? The Trade Union Movement under Ma Ying-jeou’s regime

12. A Team Player Pursuing Its Own Dreams: Rights-Claim Campaign of Chinese Migrant Spouses in the Migrant Movement Before and After 2008

14. Uneasy Alliance:State Feminism and the Conservative Government in Taiwan

Dafydd Fell is Reader in Comparative Politics at the Department of Politics and International Studies and Director of the Centre of Taiwan Studies at the School of Oriental and African Studies, UK.

Taiwan's Social Movements under Ma Ying-jeou: From the Wild Strawberries to the Sunflowers