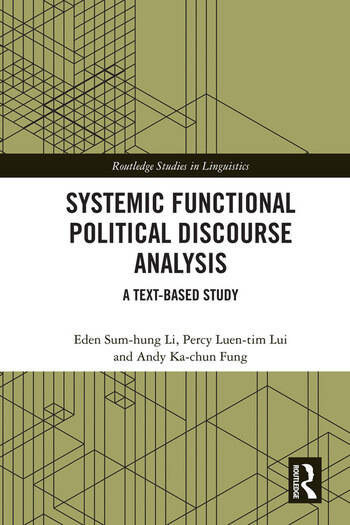 1. Analysing Political Discourse from a Systemic Functional Perspective: An Overview

Part I: Approaching Political Discourse from Above (Contextual Parameters)

8. Evidentality and Subjectivity, and Mental Process in Political Discourse

Eden Sum-hung Li is Assistant Professor in Linguistics and Programme Leader in the School of Arts and Social Sciences at the Open University of Hong Kong. He has taught at Macquarie University and the University of Hong Kong. He is the author of A Systemic Functional Grammar of Chinese and Language, Society and Culture in Hong Kong, the first author of English Today: Forms, Functions and Uses and the co-author of Analysing, and Applying English Grammar. Apart from these four books, Li has also published more than 60 book chapters, international journal articles, proceedings, and conference papers.

is Assistant Professor in Public Administration and Programme Leader in the School of Arts and Social Sciences at the Open University of Hong Kong. He is the co-editor of Contemporary Hong Kong Politics: Governance in the Post-1997 Era and Contemporary Hong Kong Governance and Politics. Apart from these two edited books, Lui has also published several book chapters and international journal articles.

has a PhD in Linguistics. As a member of the PolySystemic Research Group, he has situated himself mostly within Systemic Functional Linguistics (SFL), and specialized in functional semantics in the area of political discourse, healthcare communication and multimodal analysis. He has various research collaborations with scholars around the world, engaging in number of international conference presentations, and contributing book chapters on semantic networks.