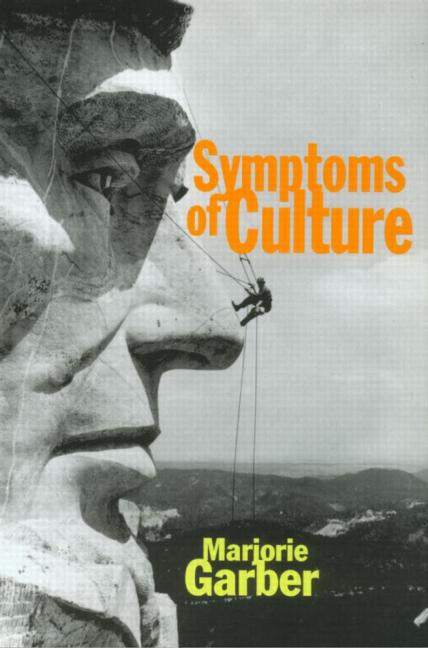 The symptoms of culture are the anxieties that underlie modern life: the instability of gender roles, the mysteries of female sexuality, the enigma of authority, the desire for greatness in ourselves and our heroes. From concern over fake orgasms to our worries about Great Books reading lists, from wanting God on our side at sports contests to wanting Shakespeare on our side whenever we want to sound important, we are a walking case of symptoms. Whatever the modern illness may be, the doctor locates the symptoms in a box of Jello or in Charlotte's marvelous web, on the football field or in the bedroom, in our great Mr. Shakespeare, in our classroom or the courtroom, or in a sneeze.

Marjorie Garber is the William R. Kenan, Jr. Professor of English and Director of the Center for Literary and Cultural Studies at Harvard. Among her books are Vested Interests, Coming of Age in Shakespeare, and Shakespeare's Ghost Writers, all available from Routledge.

"Marjorie Garber seems like the ideal dinner guest.All of these essays,] without exception, [are] exercises in dazzling literary pyrotechnics, full of fascinating facts, trenchant opinions, and unconventional connections. Garber's range is wider and her style discursive. [S]he invests words with almost magical powers, delighting in the odd coincidences between words employed in radically different contexts. The result is a series of witty, intelligent, and always readable essays that enhance Garber's position as a leading cultural critic of the byways of contemporary American popular culture." -- Australasian Journal of American Studies
"With pointed observations and wit, Garver touches on football and its connection to Christianity, video games, our fascination with roman numerals and Shakespeare." -- Star Tribune, Minneapolis
"[An] engaging volume of shrewd observations on the way we let popular cluture intrude on our sense of well-being. Anxiety over fake orgasms; Great Book reading lists - Garber's got a long list of sucj devilments, all measured with a most welcome sense of humor." -- The Toronto Star
"By far the most thought-provoking book...every essay makes astute, unexpected critiques of modern life. Garber looks not to symbols but rather to symptoms, which offer "in the specificity and oddity of the particular a clue to fantasies of the universal, the general, the eternal- all of which...are mad possible by the omission or suppression of context"." -- Recent Studies in Tudor and Stuart Drama
"goes off like a depth charge." -- Atlantic Unbound
"A master at reading the mass-cultural sign, . . . Garber glides effortlessly from a chapter on greatness to one on Jello-O. . . . In her ability to move from High Culture to pop culture, from media representations of the Scopes trial to the implications of the second-best bed from the Renaissance to the White House." -- Bookforum
"Garber's analysis of culture is probing and precise; it seeks to uncover hidden etiologies and make startling connections. She is a master diagnostician, a relentless observer of surface phenomena--movies, food products, children's books--that manifest deeper maladies. . . . Garber's writing is doubly dreamy, both oneiric and gorgeous." -- The Globe and Mail
"Deft, funny and suggestive...[Garber] also juxtaposes periods and genres with instinctive dexterity and humor ...a fun house for the intellectually playful." -- Publishers Weekly
"With the scholarship, wit, wisdom and affection of a great cultural critic, Marjorie Garber's reading of culture revolutionizes the humanities. Whether her subject is Lawrence Olivier's sexual ambiguity or female orgasm (real or faked), Garber shows us the strange fictions that pass as normality, and illustrates how modern culture is unavoidably crazy--and never more so than when lived most earnestly." -- Jonathan Dollimore, author of Sexual Dissidence: Augustine to Wilde, Freud to Foucault
"Eclectic in the best sense, Marjorie Garber focuses her laser beam on the Freudian slips of culture. Breathtaking and frequently hilarious." -- Wendy Doniger, author of Women, Androgynes, and Other Mythical Beasts
"Having suffered for some time from Marge Garber Syndrome--i.e., I can't stop myself from reading everything she writes--I approached her new collection of essays, Symptoms of Culture, with the anticipatory gleam of the addict. Nor was I disappointed: these vastly enjoyable and instructive essays--on everything from Shakespeare to Jell-O, Jack Benny to twin beds, sneezing to the Promise Keepers--confirm her reputation as one of the wittiest and most trenchant of our contemporary cultural commentators." -- Terry Castle, author of The Apparitional Lesbian: Female Homosexuality and Modern Culture
"Garber describes her symptoms so engagingly that we don't mind the lack of diagnosis, hoping that they may in the end, as she suggests, "add up to a syndrome."...[A] fine group of eclectic essays...the book's first half evinces impressive scolarship and astute social observation...[S]he has done her homework here, and her lucid synthesis of detail, documents and historical fact makes her core chapters strong." -- Liesl Schillinger, New York Times Book Review
"Garber's essays have the virtue of being both amused and amusing, self-deprecating and scathing in the face of pomposity." -- In These Times
"Symptoms of Culture sets about the project of understanding culture with ingenuity and a sharp ear for the pun." -- Village Voice
"Symptoms of Culture is tantalizing, amusing, [and] learned." -- Sarah Boxer, New York Times
"We are what we eat, culture-wise, and Garber invites the reader to partake of an amazing banquet of our culture, from fine cuisine to junk food. A nimble intellect and good humor in service of sophisticated ideas." -- Chronicle, Cambridge, MA