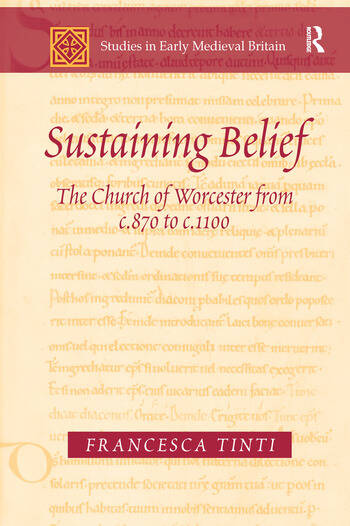 This book reconstructs the late Anglo-Saxon history of the church of Worcester, covering the period between Bishops Waerferth and Wulfstan II. Starting with an examination of the episcopal succession and the relations between bishops and cathedral community, the volume moves on to consider the development of the church of Worcester's landed estate, its extent and its organization. These are analysed in connection with the very significant measures taken in the eleventh century to preserve - and sometimes manipulate - the memory of past land transactions. Of paramount importance among such measures was the production of two cartularies - Liber Wigorniensis and Hemming's cartulary - respectively compiled at the beginning and at the very end of the eleventh century. Last but not least, the volume considers ecclesiastical organization and pastoral care in the diocese of Worcester, by looking at the relations between the cathedral church and the other churches in the diocese. Special attention is given to the payment of church dues and to such aspects of pastoral care as preaching, penance and visitation of the sick. Thanks to the combined analysis of these areas, the book offers a detailed picture of the main occupations (and preoccupations) of the late Anglo-Saxon church of Worcester in its interaction with society at large: from its tenants to its faithful, from the clergy in its diocese to its opponents in land disputes.

'Much of the local organisation of later medieval England - hundreds, manors and parishes - had its roots in earlier medieval arrangements. Anyone seeking to understand these administrative building blocks within the diocese of Worcester, the sources for them and how they have been studied by previous historians, now has an infallible guide in Francesca Tinti's learned and impressive study.' Midland History

'... an exceptional work of scholarship, and an important contribution to the study of ecclesiastical history in Anglo-Saxon England.' Medieval Journal

'... the production of the book does credit to its contents - and the contents add lustrously to our knowledge of late Anglo-Saxon England.' The Medieval Review

'Tinti is to be congratulated for the variety of material examined in this book, the meticulous care with which she treats very complex sources, and her many judicious correctives to the secondary literature. The book includes numerous maps and black-and-white images of the documents, manuscripts, and church fabric Tinti discusses in the text. It also features footnotes rather than endnotes, many helpful tables, excellent indices, and a full bibliography. Specialists in the Anglo-Saxon church will find much of importance and interest in this volume.' Church History

'Formidable scholarship and attention to detail are brought to bear on the complexities of the rich archival records of the church of Worcester in the period in question, and the author shows a high level of expertise and a detailed grasp of the source materials and the technical literature relating to them.' Early Medieval Europe

'... it is remarkable how many new discoveries Francesca Tinti makes in this thorough and penetrating study.' Journal of Medieval Archaeology