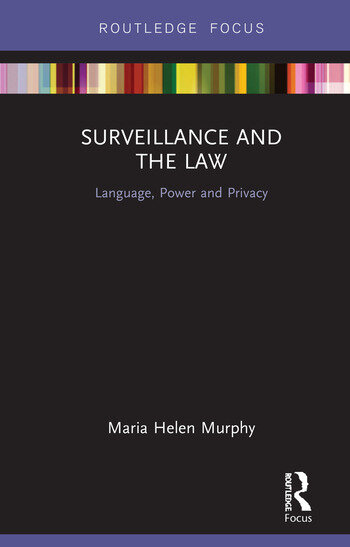 Surveillance of citizens is a clear manifestation of government power. The act of surveillance is generally deemed acceptable in a democratic society where it is necessary to protect the interests of the nation and where the power is exercised non-arbitrarily and in accordance with the law.

Surveillance and the Law analyses the core features of surveillance that create stark challenges for transparency and accountability by examining the relationship between language, power, and surveillance. It identifies a number of features of surveillance law, surveillance language, and the distribution of power that perpetuate the existing surveillance paradigm. Using case studies from the US, the UK, and Ireland, it assesses the techniques used to maintain the status quo of continued surveillance expansion. These jurisdictions are selected for their similarities, but also for their key constitutional distinctions, which influence how power is distributed and restrained in the different systems. Though the book maintains that the classic principles of transparency and accountability remain the best means available to limit the arbitrary exercise of government power, it evaluates how these principles could be better realised in order to restore power to the people and to maintain an appropriate balance between government intrusion and the right to privacy.

By identifying the common tactics used in the expansion of surveillance around the globe, this book will appeal to students and scholars interested in privacy law, human rights, information technology law, and surveillance studies.

1. Lost in translation and exploitation: the case of encryption

Shifts in power and the ‘Crypto Wars’

Fear and rhetoric: debating encryption in the political sphere

The power-limiting purpose of the Fourth Amendment

The third-party doctrine and technological development

Translating judicial standards on the ground

Implications inside and outside of the courtroom

The principle of legality in practice

Beyond legality and the role of the judiciary

4. Independent oversight in the surveillance context

Ireland: the ‘Designated Judge’ and the ‘Complaints Referee’

Open justice in the covert context

The role of the legislature

The folly of ‘future proofing’ and technology neutrality

The Public Services Card in Ireland: ‘mandatory’ not ‘compulsory’

Maria Helen Murphy is a lecturer in law at Maynooth University.