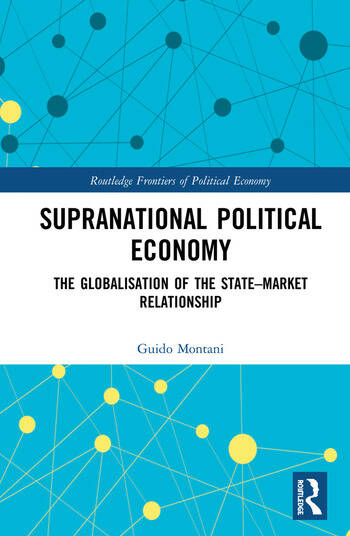 Supranational Political Economy: The Globalisation of the State–Market Relationship

With the ending of the Cold War and the rise of a nationalistic ‘America First’ strategy, the post-war liberal international order, based upon the hegemonic power of the USA, is fading away. In its place, a multipolar world is emerging which, while offering some the hope of a better future, is also open to disorder and instability. This book offers an insight into the relationship between politics and economics in this new era.

As an alternative, this volume argues for a form of global governance that will offer a better balance between politics and economics, based on a supranational approach. A supranational approach in which world powers and UN member states can work in agreement would follow the principle on which European political and economic integration was built. The system put forward here is based on a Keynesian world clearing union and a reform of the World Trade Organization and a United Nations budget, which would accelerate the convergence of rich and poor countries in the aim of a more sustainable global system. This book demonstrates that globalisations and today’s ecological challenges are both a cause of social discontent and an opportunity. Supranational institutions can greatly increase our ability to address global risks, and this book shows how a 'supranational' world order could reduce the uncertainty of the transition from the post-war order to the future multipolar order.

The supranational principle enables us to view globalisation, world capitalism and the ecological crisis not only as causes of inequality, poverty and social instability, but also as processes that can be governed. Wise politicians and political parties cannot let the future of humanity be decided by the precarious equilibrium of the Westphalia system. In post-war Europe a group of nation states, once fierce enemies, embarked on a process of integration which led to the abolition of inter-European national borders. With supranational global governance, the same could be achieved in the global system.

Part I The supranational approach to political economy

1. 1 The birth and development of IPE: from Bretton Woods to globalisation

1. 2 The ideological and institutional limitations of IPE

2. From the Cold War to global disorder

2. 2 The break-up of the Soviet empire

2. 3 The decline of the American empire and global disorder

3. 1 The constitutionalisation of state-market relations

3. 4 The government of globalisation: the longue durée and the stabilizer

3. 5 The gold standard, the British stabilizer and economic nationalism

3. 6 The gold-exchange standard, the US stabilizer and global disorder

Part II Lessons from the past

4. The federal state and Hamilton’s problem

4. 1 The federal state and federalism

4. 5 The federal constitutional balance in US history

4. 6 The federal constitutional balance in the twenty-first century

Appendix – The federal state and sovereignty

5. European integration and the supranational principle

5. 1 The supranational approach to the study of European integration

5. 2 The birth of supranational institutions

5. 4 The Economic and Monetary Union

5. 5 The crisis of the European Union

5. 6 Beyond the crisis: towards a supranational democracy?

6. Technology, work and the Anthropocene

6. 2 The scientific and technological revolution

6. 3 Rich and poor, divergence and convergence

7. 2 Financial capitalism in the US

8. 1 Proposals for the sustainability of the Earth system

8. 2 The international monetary and financial order

8. 5 Technologies and policies for the sustainability of the Earth system

Guido Montani is a Professor of International Political Economy at the University of Pavia, Italy. He has published several papers on the theory of value and distribution in classical political economy and many books and papers on the theory of economic and political integration in Europe and in the global economy. He is also an Honorary Member of the Union of European Federalists.

Supranational Political Economy: The Globalisation of the State–Market Relationship